Sometimes I love my job. Give me a new gadget that works to its specifications and it keeps me happy for hours. The iStorage diskGenie is one such product. I’ve been playing with it for weeks and it’s travelled with me in the US and Europe. At no point has it let me down and, despite its unusual appearance, it has never been the source of close questioning from airport security personnel. 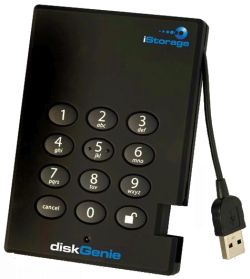 What makes the diskGenie special is that it carries on-board encryption – either 128bit or 256bit AES. This is hardware encryption which has three benefits: it’s almost impossible to hack, doesn’t detract from performance, and will run immediately on any USB-enabled operating system.

Setting up the drive involves using the on-drive numerical keyboard to reset the default administrator password. Then, user passwords can be set for up to ten additional users. Personally, I would suggest that it is more secure to limit the number of passwords to as few as possible because the more passwords used, the more likely it is that a hacker would find one that works – but this is a small risk. Numeric passwords, or PINS, can be between six and 16 digits so the number of possibilities

If someone tries ‘brute force’ hacking to try to guess the PIN, after six attempts the drive locks up and has to be unplugged to reset the system. After 50 unsucessful guesses, the drive switches off and the USB plug has to be re-onserted, while pressing a key, and then a passcode has to be entered.

After another 50 attempts, the drive shuts down completely and has to be reformatted before it can be revived. This destroys the data making any attempt to recover it futile.

In use, the drive seems no different to any other disk. The use of hardware-based encryption means that conversion is not reliant on the computer’s processor and has no obvious effect on speed. Streaming video from disk showed no freezing effects and lossless music files played perfectly.

There is also the possibility of booting the operating system directly from disk for extra security, given that most modern laptops allow this. It does mean interrupting the loading process while the passcode is keyed in but that’s a small price to pay.

My only qualm about the drive is that the USB lead is directly attached to the unit. Wear and tear will inevitably break the connection and render the drive useless – or, at best, difficult to repair. I would prefer to see a separate miniUSB to USB connection even though the current arrangement makes for neat storage of the lead.

By no means a criticism of iStorage but of the secure encrypted media world. It would be nice if the company provided a returns service. By this I mean an optional service whereby the company places its address as a return address on the back of the drive and, for a fee, will return any lost drive, returned free of charge by the finder, to its original owner for a small charge.