The Xperia range seems to be expanding and evolving everyday, which is by no means a bad thing. What I have here is the latest Xperia Mini Pro, not to be confused with the Xperia Mini or the older Xperia Mini Pro. See what I mean, there’s hundreds of them.

Times have certainly changed since the release of the Ericsson T20 (one of which I used to own and treasure) back in 2000 but this Xperia Mini Pro has a touch of the old school about it. 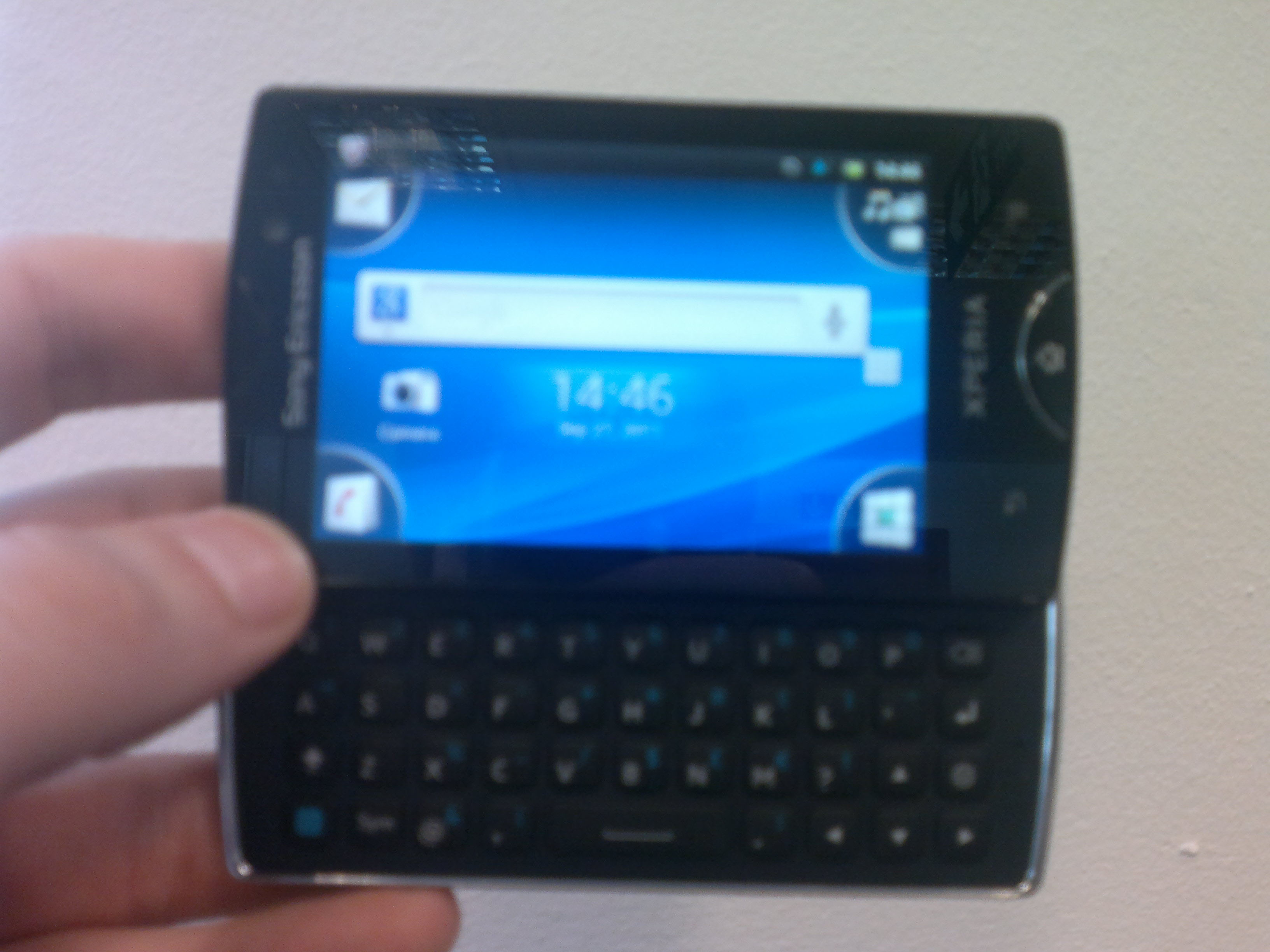 The Xperia Mini Pro is almost identical to the Xperia Mini, in fact, pretty much the only difference is that the Mini Pro has a slide out QWERTY keyboard.
Measuring 92 x 53 x 18 mm and weighing 136g the Xperia Mini Pro is definitely dinky, however, it’s managed to avoid being impractical.
Available in either white, pink, turquoise, or black, this Sony Ericsson offers simple, modern, sensible looks combined with top notch build quality. Everything feels very well put together and the solidness in the screen when the keyboard is pulled out is proof of that.
Rather than trying to describe things further I recorded a 360° video (please excuse the sniffing noises, I had quite a bad cold when I recorded this):

The screen is a 3.0 inch,  320 x 480 pixel offering. It’s an  LED-backlit LCD, capacitive touchscreen, capable of displaying 16M colours. Although the resolution may fall way short of standards set by leading devices such as the Samsung Galaxy SII, the screen, because of it’s size and pixel density, is still impressive.

It’s also worth noting that the Mini Pro has an  auto-rotate feature built in, so the screen flips to either landscape or portrait automatically depending on whether or not the keyboard is out.

The 512MB RAM and 400MB internal memory are a little disappointing, more so if you plan to use one of the four specially purposed pre-installed apps which allow you to download games.
On the other hand, it does come with a 2GB MicroSD, which can be upgraded to 32GB.
If you do end up filling the Mini Pro with games or using the Office Suite App then the 1GHz Scorpion processor and Qualcomm MSM8255 Snapdragon chipset should have no problems in running them.
Without doubt, the keyboard is the selling point of this phone. I’d say its ideal for those who aren’t quite ready to make the move to a fully touchscreen handset yet, the pefect halfway solution, easing you in gently.
At the same time, as a person who has used solely touchscreen handsets since the release of the first iPhone in 2007, I found the keyboard a pleasure to use. The keys look and feel firm whilst remaining comfortable. The spacing is spot on, if it was any smaller, or the top row was closer to the screen, then there could have been problems.
Camera:

Sony Ericsson have fitted the Xperia Mini Pro with a HD 5MP camera alongside an almost blindingly bright, LED flash.

Other than that there aren’t a huge amount of things that the camera can do but some times less is more. It does what it says on the tin and does it well.

The Xperia Mini Pro also has a front facing camera and I know I said in my last review that the Nokia E6 had one of the best front facing VGA cameras I’d seen, well…. this tops it, and by some way as well.

The interface for both the video and camera is simple, clean and, most importantly of all, easy to navigate and operate.

I put the 720p video recording to the test here:

This Sony Ericsson runs Android 2.3.3 (Gingerbread) but an update to 2.3.4 is available.

I think the important thing here is the little touches, like the when the screen is locked the Mini Pro screen goes black in the style of an old fashioned TV (see the video in the looks section).

Next, a pinch on the homescreen see’s all the widgets from the five screens start to float around, with a single tap taking you to that widget.

Thirdly, being unable to organise apps in the order I want is something that bothers me when I use Android devices, especially because I’m used to doing it on my iPhone. That ends here, Sony Ericsson very kindly offer you four options, either your own order, alphabetical, most used and recently installed.

Finally, the main homescreen also features four shortcuts to apps in the corners, which I found very useful. 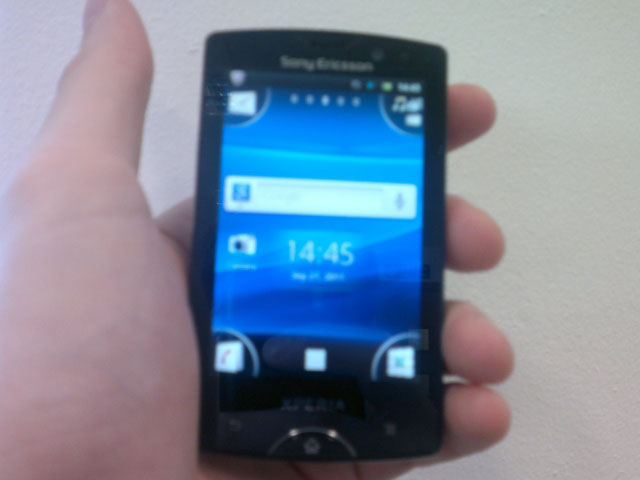 Sony Ericsson state standby time is between 331 – 340 hours and talk time is between 5 hours 40mins – 5 hours 25mins.
As the handset is quite small you’d expect it not to consume much power but unfortunately it does.
Trying to resist picking up the Mini Pro every half an hour just to slide the keyboard out and in again is like trying not to lick your lips when eating a sugary doughnut. Yes, impossible.
Even with just general usage you can see the battery decrease with each task so you’d need to keep your charger handy.
The call quality gave me a shock, I thought the little speaker and microphone would struggle to deliver and pick up sound but the reality was that it was actually better than my iPhone 3G.

Summary:
For me, the cocktail of well styled, sturdy and reliable hardware, along with the feature packed, yet easy to use, software that the Xperia Mini Pro has on offer means it is a smartphone that can play as hard as it works.
The keyboard should appeal to both an older generation who are used to buttons as well as business people who use QWERTY keyboards day in day out. However, it is a shame that for all the convenience the Mini Pro brings with it’s size, some of it is lost by the short lived battery life.
That said, it is easy to see why the Sony Ericsson range is a popular one and each new handset brings a fresh approach to the table, thankfully the Xperia Mini Pro doesn’t deviate from that ethos.
SearchCIO
SearchSecurity
SearchNetworking
SearchDataCenter
SearchDataManagement
Close