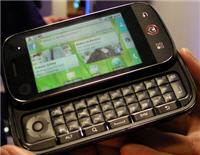 Hello Motorola, I said, unwrapping the PR package – because I am that indoctrinated, that brain-mushed, I frequently talk to myself using catch-phrases from adverts. Simples.
The Motorola DEXT (called the Cliq in the United States of the Americas) is the company’s other hot phone of the late noughties. You know, the one that isn’t the Motorola Milestone? That by the way, was called the Droid everywhere else but Blighty.

It’s as though whoever’s in charge of Motorola’s branding outside the US is one of those guys. You know who I mean. He’s some big cheese in regional, who waits until the end of the discussion and then laconically sticks his hand up. “Actually, I disagree,” he says, just when you thought you’d sorted out the office coffee rota.

So – the DEXT. I played with it a bit before Christmas came along and snowed me in, stomach distended with brassicas and brandy.  Here’s what I liked:
The brilliant, beautiful keyboard. Seriously. Some folks have said that it wasn’t to their taste – but stacked next to the Blackberry’s cramped collection of keys or any virtual keyboard, it wins big. It slides out from behind the handset, which looks very iPhoney in form and and size when closed. When opened, it’s more like a mini netbook. A teeny, tiny web wonder. The keys are ergonomically moulded so your fingers easily find the right characters – instead of the one next to it. Or the three next to it.  So far, so ace.
This is a phone you can imagine doing business with. It was Motorola’s first Android handset, so you have the benefit of Google’s growing App store and easy installation. And the phone itself comes with a dedicated headphone socket as well as mini-USB for folks who like to use their handsets as MP3 players. Or, to stream Spotify.
On the whole, then, I was favourably disposed towards the DEXT, which was easy to set-up and use. I mean, what’s not to like about such a powerful little gadget. With 1GB onboard storage, 256MB RAM and a CPU running at 528 Mhz, the DEXT is significantly faster and stronger than the first Motorola powered home computer I bought; an Atari ST. That was back in 1985 though… And it was the size and weight of four house bricks.
The DEXT fits nicely in the palm, when not in extended keyboardy mode. It feels like a phone, not a PDA with a voice bolt-on. So, welcome to the 21st Century, astronauts.
Still – and perhaps this is personal – I’m not overly keen on Motorola’s UI, “Motoblur”. It’s part of a growing trend among 3G phone manufacturers and service providers, showcased too in the recently released Vodafone H1 360 ( a Samsung handset), to candy coat the underlying features of VERY POWERFUL PHONES with a cartoon layer of social media connectivity.

The idea is that your handset is a gateway to social media services – Twitter, Facebook, MySpace and some that your service provider bolts on – so that you can be umbilically connected to everyone in your address book, 24/7.

“I just ate cheese!” bleeps Chris’s status update. You know it’s him because you can see his avatar battling for screen estate with a bunch of others and you know he said it because there’s a little speech bubble coming out of his beardy hipster gob. It’s all so… tiresome.
There are markets that suck this kind of stuff up (I’m looking at you Japan). Not me. I want a phone that makes calls, runs apps, does a bit of video and music. And, fortunately, the DEXT does all those things brilliantly well. Better than many of it’s smartphone rivals. If I didn’t have to send it back, I would have just set my home page to show the weather and forgotten all about the tedious social networking features.
But I did have to send it back, sadly, reluctantly. Goodbye Motorola DEXT.
The Motorola DEXT is available exclusively from Orange with Pay Monthly plans starting at £30 a month.
Here’s the science bit, grabbed from Motorola’s DEXT fact sheets:
SearchCIO
SearchSecurity
SearchNetworking
SearchDataCenter
SearchDataManagement
Close