The sad thing is, Palm’s WebOS could have quite easily surpass both Android and iPhone had it not been for poor marketing.

WebOS is by far the best multitasking operating system there is. The thought put in by Palm to develop WebOS means that it’s easier to use than any other.

The main strength is the fact that after opening an application, you hit the home button and then you have the apps appear as ‘cards’. You can look through the apps and pick the one you want to use while the others stay running in the background.

In order to close an app, you simply flick the ‘card’ off the screen. It’s that simple. The other thing is you can have around 8 apps running at a time before you start to feel serious lag and encounter problems. Something the iPhone wishes it could do.

The quality of the apps is up there with Apple, although the choice is still limited. Nevertheless the apps that are available are of such quality that when you get a good one, you’re not going to need to try many.

WebOS also has the ability to integrate information from different sources such as Gmail, Yahoo!, Facebook, LinkedIn, and Microsoft Outlook (via Exchange ActiveSync). The calendar is also clever and integrates calendars from multiple sources. 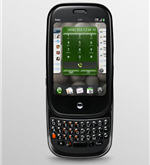 Compared to the other operating systems, WebOS is the one that I feel is easiest to use as well as being the most fun. I don’t mean fun in a games or widget way, I mean fun in that the way you interact with the OS, such as flicking apps off the screen, is a joy and not a chore.

Sadly WebOS fails due to the fact that the company, Palm, failed in its marketing and couldn’t keep up with the big boys.

This meant Palm struggled and was eventually bought by HP. this uncertainty hindered Palm’s progress and now HP look like they will use WebOS for devices other than phones.

This also meant that the choice of phone was limited. The Palm Pre and Palm Pre Plus were probably the best Palm phones with the Palm Pixi and the Palm Pixi Plus the only other alternatives.

The Palm Pre and the plus version are very good but, a difficult QWERTY keyboard as well as some problems with the build quality of the hinge keyboard slips out with.

WebOS is by no means far behind iPhone and Android, at the moment anyway. In a year or so we’ll know exactly what HP has install for this fantastic OS.

Voting in the video and the poll below will still count to the overall result.

Which is the best mobile OS?Market Research