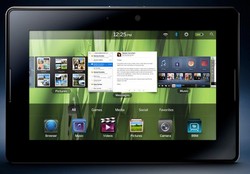 I for one like the PlayBook. I know I’m a minority but I think it does a lot of things very well, it’s a great size and very user friendly.

Nope, wrong. Email and BBM are the reasons you buy a BlackBerry. Without them, all you have is a poor smartphone with no apps.

Of course my liking for it ignores these facts:

I’m ignoring ALL of that.

Here’s the statement they sent us:

We currently have no plans to release the BlackBerry PlayBook on O2 – we’ll continue to look at all RIM’s products to make sure we’re offering our customers a range of the best products on the market.

They’re not planning to release it because they think it’s crap. There I said it.

The O2 bigwigs sat with the PlayBook in their office and, seriously, they thought “No email client or BlackBerry Messenger? Who’s gonna buy this??” To which another bigwig replied “Why should we sell it??”

And they aren’t / won’t. This is yet another nail in the PlayBook coffin as it is quickly becoming the tablet everyone is loving to hate.

A little bit, I wouldn’t buy one or swap an iPad for it.