Just my luck, a matter of days after I write 5 of the weirdest phone patents, one of the coolest and weirdest mobile patents hits the internet.

I didn’t fancy changing the afore mentioned post into “6 of the weirdest phone patents” for two reasons. One, this new patent I’m about to discuss deserves its own post and two, “6” doesn’t have the same ring to it as “5”. If it was “7” however, that would be a whole different kettle of fish.
So, this is the second Microsoft smartphone patent to catch my eye in recent times, after this of course.
This new patent outlines a dual-screened smartphone, with the rear screen being labelled a chuckle inducing “backside display”. 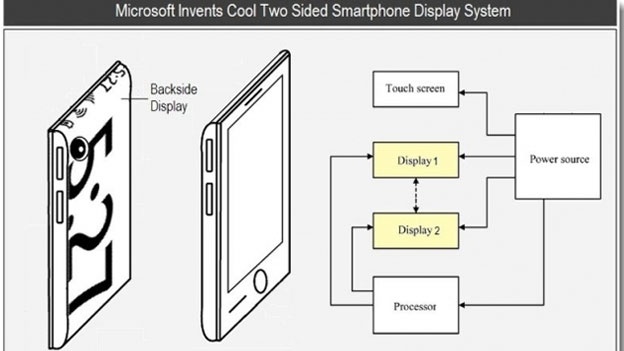 It is unclear as to whether Microsoft plans to go it alone with this hardware or if they plan to offer it out to other manufacturers who utilise Windows phone OS on their handsets.
The paperwork reveals plans for the rear display to act as lower powered, watered down, interactive panel. Sort of like a Kindle display, but most likely with colour.
It would be powered by a secondary, smaller, processor and, as you can see from the patent, would display information such as time, signal, alerts and battery life. Not only that, Microsoft detailed that the display could also be used to display customisable logos.
This raises the question, could it spell the end for those market stalls up and down the country that have been selling substandard and unlicensed tacky phone covers for years?
Jokes aside, the real question it raises, for me at least, is what material will the phone or, more specifically, the rear screen be made out of? Gorilla glass?
It’s a shame that on the off chance this patent does actually make it to production, it probably  won’t be anytime soon.