I’m on a mission, or a quest, call it what you will.

This personal pursuit is simple, yet it’s not… I need the ultimate travel work device.

As a technology journalist (COVID-19 Coronavirus notwithstanding), I am constantly on a plane, train or airport metro connection. When I’m not in one of those locations I’m in a spokesperson briefing, a press conference theatre, a keynote auditorium or (just occasionally) I’m at my desk.

So, because of this, for a long time now I’ve been trying to find the ultimate on-the-road machine.

My Huawei Mate 20 Pro is superb, but you wouldn’t write a story on it. The Gemini PDA by Planet is also superb and you can write on it, even propped up on a wheelie bag while waiting for a delayed flight (I did this in Knoxville, Tennessee)… but I have always lamented the fact that they could have made it bigger.

What we need is something just a bit bigger than an Android tablet like the Conker SX-80, but with its own a dedicated (but essentially detachable) keyboard. Yes okay, the 10.5 inch iPad is kind of there, but a) you have to buy your own keyboard b) Mac OS X is great for loads of things (and Android and Linux rock), but often you want Windows.

Did we hit bingo then? Microsoft’s 10.5” Surface Go 2 is one of the latest devices from Redmond in a line that we first got to know some eight years ago. 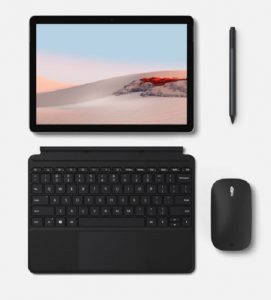 First impressions then — straight out of the box, oh, nice screen; they’ve clearly gone for the whole ‘Apple can do massive pixel richness and so can we’ effect. The official specs note that Surface Go 2’s 10.5” PixelSense™ display has 220 pixels per inch (ppi) resolution, with a 3:2 aspect ratio, 10-point multi-touch and Corning Gorilla® Glass 3.

The keyboard is tangibly smaller than the Surface 4 Pro that I’ve used in the past (which is much more like the size of a full laptop keyboard), but this is not to its detriment.

There’s a backlit mechanical keyset including a function row and glass trackpad – the backlit keyboard is a real bonus, really good for working on late night plane flights as it somehow ‘magically’ draws power from the main unit for light (it has no charging  slot for its own power).

The Surface Pen is arguably more useable with this smaller form factor device. Remember how the Samsung Galaxy Note smartphones came with a stylus pen (which they may still do) – because it feels right to use a pointer on a smaller device, right? Microsoft could see more uptake of its pen-related technology here.

According to Microsoft, “Surface Pen delivers our most natural writing and drawing experience yet. With tilt support for shading, 4,096 levels of pressure sensitivity, and virtually no lag.”

Microsoft has said that the Surface Go 2 is targeted at businesses, schools, students and families. This means that the company has been quite careful about saying that it’s a device for leisure, but if (like me) you actually want to work on it and use it as a travel mini-workstation, then you can. 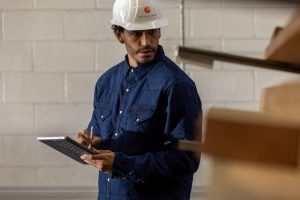 The unit itself weights 1.2 pounds (without the Type Cover) and the glass trackpad is good enough to discourage you from using a mouse. That said, I still connected a Bluetooth mouse – just because I wanted to.

If you need more space for photos, videos, and music, you can add up to 1TB of storage to the built-in MicroSD Card Reader. Although why you wouldn’t just use an external terabyte drive for portability and security comes into question here.

There are HD 5MP front- and rear-facing cameras, which are important in this era of Zoom. Microsoft has also added a new Camera app for the rear-facing camera to make it easy to scan documents and whiteboards.

Oh… and there’s a volume and a power button too, which you would probably (hopefully) expect.

Sensors include an ambient light sensor, an accelerometer, a gyroscope and a magnetometer.

As a side note, Microsoft hasn’t monkeyed around with connection standards and a Surface Pro 4 power connector works just find on this device if you happen to have both machines.

… and finally, does the Microsoft Surface Go 2 pass the journalist ‘knee-test’ then?

The Surface One failed at this dramatically i.e. you simply couldn’t prop it up on your knees and sit writing on it because the body unit (computer) was too heavy in comparison to the keyboard and the magnetism between the two started to become flaky enough for them to separate.

No such worries with the Surface Go 2, everything is more tightly coupled and the unit itself is obviously so much lighter.

A perfect form factor then? Perhaps… or certainly as close to it as we’ve seen for the kind of use cases that have been described here. You’d have to have fairly enormous trousers to fit this in your back pocket, but it’s slick machine with a lot of appeal.

This story was written on a Microsoft Surface Go 2.