I have a usability issue. My Huawei Mate 20 Pro smartphone is great, but I can’t write things on it… and, believe it or not, I am a writer.

Last year I attended a conference in Washington DC and saw a Chinese journalist filing copy on her smartphone using a small Bluetooth keyboard. I thought to myself… why aren’t those two devices connected at the hip? I assume you’re getting the picture here.

The Gemini PDA by Planet Computers was offered to me for review by a marketing man who said, “Right then, here’s a device that is about to change your life.” Could it really be true?

We’ve been here before, kind of

The Gemini (presumably named because it ‘twins’ a full travel keyboard with an Android smartphone) is reminiscent of the Nokia Communicator and Psion Series 5. Those devices didn’t stick around for as long as they might have and the trend for ‘on screen’ keyboards finally even made it to the Blackberry, so go figure.

But many of us (writers, journalists, bloggers, businesspeople) need something more than a touchscreen experience that takes up around a third of the display leaving very little screen real estate left inside which to (attempt to) be creative.

The Gemini comes as a mobile 4G + WiFi LTE version and a WiFi only version, both featuring a full QWERTY keyboard. It fits in a back pocket with room to spare, although it probably peaks out the top of your pocket more than a smartphone would — it sports a 5.99″ hi-res screen.

When open, the clamshell design also acts as a support for the device. You can just about use it on your knees, but it really needs to be on a hard surface to get the best out of it.

According to Planet Computers, the fully tactile keyboard is recognised as the world’s best yet smallest full-sized keyboard for finger touch typing. Touch typing at 50 words per minute is very achievable.

Aside from being useful for people who write words for a living, there are a number of additional reasons why this might be a ‘life changing’ device in real terms.

Think about technical, medical or other niche staff jobs who need to write down long rarely used words, this has to be easier on a full keyboard than on a smartphone screen with autocorrect constantly trying to change your letters. Also… as of 2019, it is still considered somewhat rude to type notes on smartphones in meetings. This factor is arguably overcome with the Gemini.

At this point we should mention, the Gemini is also a smartphone and calls can be received with the clamshell shut and keyboard stowed. There’s no external screen though, so you’ll need to make calls from your ‘desktop’ if that’s how you want to use it.

In terms of real world usage (and these notes are written on the Gemini device itself), the typing functionality is really good.

The difference between this unit and a smartphone for someone (like a journalist or any other content creator) is that you `feel’ like you have a screen and keyboard (which of course you actually do) and so it provides the `creative space’ factor that is familiar.

You have the option to use the keyboard to cut paragraphs around, shorten and lengthen text… and basically edit in the same way that you would when using a desktop or laptop machine — however proficient you are with a smartphone on-screen keyboard, the difference should be dramatically apparent.

The arrow keys allow you to jump around your text and highlight areas that you might want to break out before then going back to insert sub-headlines and so on. And yes, we know that sounds silly to say out loud because that’s what any other full size keyboard does, but saying it out loud is the whole point here

No mouse is needed and you don’t need to think about using a pen stylus for the touchscreen, it’s easier to touch the screen with your fingers

In terms of criticisms, the device is still smaller than a pocket in your favourite pair of jeans, so they could have arguably made this thing 10% or 20% bigger and it would have still worked

The on board Notes app doesn’t always perform at enough speed for editing documents, but that’s fine because Google Docs is free and it works a treat.

Some reviews have been less than keen on the browser (Android is most usually used vertically in portrait mode rather than horizontally in landscape as is the case here), but we found the performance fine.

The stereo speakers are there, they’re okay, they’re not world beaters, there is a headphone jack.

The full stop mark is very close to the dot on the bottom of the question mark key, so if you’re just on the verge of needing glasses then it’s easy not to see it initially — but that’s nitpicking, period.

The device itself is capable of a dual boot into both Debian Linux and Android although we did not try Debian as part of this review. The Gemini is also capable of running the Sailfish mobile operating system (OS) if the mood so takes you.

Also included is an accelerometer, light sensor, gyroscope, magnetic-sensor and a dedicated voice assistant button. The device has a two-week stand-by battery life and around 10-hours standard use battery life.

The crucial matter is price then. The 4G version comes in at £599 and the WiFi only version is £499.

Was it life changing?

So then, was it a life changing experience after all?

The short answer is, yes, so far.

The litmus test being that half of this review was written on the device itself sat on a plane from Gatwick to Fuerteventura. The other litmus test (for me personally anyway) is whether I would place it on my desk next to my main machine and use it to (for example) answer email while working on a full size machine — and yes, that works well. Although MyMail works (for me at least) better than any version of Gmail itself.

The other litmus test is whether I would take the device with me as a standalone machine to work on and again the answer is yes, very much more so than a smartphone, where editing work is simply not really an option.

The Gemini PDA is just about a fully functioning mini computer small enough to fit in your pocket — and it’s a thing of beauty. Planet Computers’ next enhanced version of the device tested here will be The Cosmo and more information is linked here. 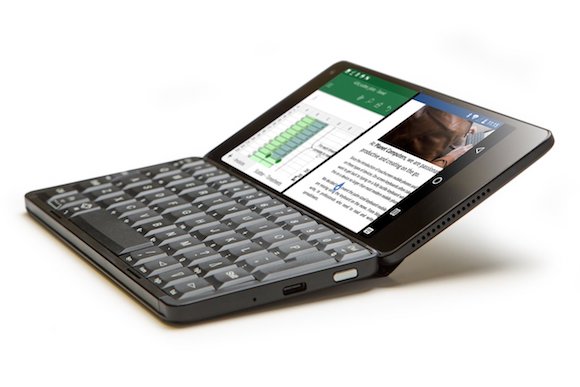