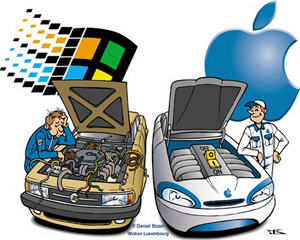 I was interviewed about Macs versus PCs. Here is what I said on price, style etc.

Here is the interview in full.

Q. Is it possible to summarise the main differences between Macs and PCs, the key features that set them apart?

The best way to describe the difference between a Mac and a PC is that they are two different ways of thinking. In most cases you can come to the same result using either but they will go about it in a different manner. For example when using Windows on a PC, to close the program, a user simply clicks the red X at the corner of the program window.

However, for Macs, this is not the case. When the red X on a Mac program box is clicked, that window closes but the program does not. It is still open and running, even though there are no documents or windows open. To close a program completely, a user must click on the program name on the top status window (it must be active to do this) and then click on Quit.

Another way to close a program, which is usually faster, is to use the shortcut Apple + Q. The Quit command closes all multiple windows that may be open under the program.

This is all down to the fact that Macs run on the Mac OS X operating system and PCs run on Windows. It’s down to the individual as to which is easier to use. You can run Mac OS X on a PC but not vice-versa although OS X on a PC wouldn’t work as well as on a Mac.

There are also differences in hardware in that Macs are only built by Apple whereas PCs are built by a number of companies. This reflects in the price, in that Macs are generally more expensive, and the quality of Macs is considered more stable and stylish.

Q. Most creatives, designers, musicians and others, seem to use a Mac, why would you say that is?

Macs appear to be cooler/trendier but they are also a better fit for designers. Apple has carved out a reputation for being the ‘alternative’ choice for those that see themselves as an individual, which is what art is all about.

But it’s not just about image. Macs tend to be the best platform for design and creativity due to the strength of the applications available for it and the fact that Macs are generally high quality computers.

This and the image of using a Mac make up the perfect team for those that see themselves outside the corporate culture.

Q. Would you agree that, for those in the creative industries, a Mac is a better fit as a laptop, or are there PCs that can do just as good a job, for less?

There are PCs that can do just as good a job, especially as you can build a PC. The only problem is that Macs have applications that run only on Macs. Many would argue that that is not the case, but these applications are built specifically for Macs and so the PC version is usually an after-thought, although this is starting to change.

I can’t speak for every industry but for publishing it would be very difficult for us to just use PCs.

Q. Why do you think Macs, just as with the iPhone and other Apple products, receive so much coverage when they still have a relatively small market share, compared to PCs?

It’s just very good marketing. Apple understands how to manipulate the market and how to instigate a media frenzy.

The build-up to a product launch is something Apple has mastered, just by being very secretive about their ideas and what they’re creating. This is also helped by the fact that Apple is genuinely very creative, often releasing something fresh and new.

Once the product is launched, Apple uses a very subtle yet strong approach. Their advertising is always understated and the company relies on enthusiasts to promote their products by word-of-mouth.

It’s this passion and eagerness that pushes the media to provide so much coverage.

Q. To what extent do you think that the discussion about Mac vs. PC is not so much a case of which is better, but rather about your needs as a user and what you primarily need a laptop for?

Whenever anyone asks me for advice as to which PC or Mac they should buy I always ask ‘what do you need it for?’

The reason is that unless you’re editing video, graphic design etc. then you probably don’t need to spend that amount of money on a Mac.

Most people just want to browse the web, check their e-mails and use a word processor, which doesn’t need a high-powered machine. This is the reason for the rise of the netbook, they’re cheap and do all basic functions without too much hassle.

The needs of the user are paramount but people like the idea of saying they use a Mac and the image that goes with it, even though in most cases they’re not using it to its full capabilities.

Q. Apple has a very strong brand identity. How much of the appeal of Macs do you think has to do with marketing and with its desirability as a brand, a status symbol?

It has everything to do with marketing and branding but also the fact that their products are great.

Apple is very clever and deserves a lot of credit for resurrecting a company that was struggling in the mid-nineties.

There’s no question that having a Mac, iPhone, iPad etc. has a stigma attached to it, but that shouldn’t take anything away from the fact that these are fantastic products. If they weren’t so good then all the marketing in the world wouldn’t help.

People buy into the marketing but they then add to it by evangelising the products. When someone has a Mac, they generally tell people about it and promote it either by word-of-mouth or by writing about it (blogs, Twitter, Facebook etc.).

This wouldn’t work if the products weren’t so good and easy to use.

Q. Although there are also high-end PCs, Macs are generally far more expensive than a PC. Do you think the higher price is justified?

The price point isn’t justified in relation to a similar specification PC but Apple sells the products at a premium, making them more desirable.

If Ferraris were cheap that would ruin their desirability.

It says a lot about you if you spend money at the higher end and if you save up for something, you tend to feel more of a sense of achievement when purchasing it. In a strange way it’s a win-win situation.

Q. Macs are considered to be the trendier and cooler laptop option. How important do you think style and design is to its popularity?

It’s part of the package. Apple products are seen to be premium products and the style and design is part of that image.

The functionality is great but, as I said before, Apple relies on people to promote the product. The fact these products look great makes people want to show it off.

In technology you rarely find a product that does well on looks alone, but when you marry style with functionality then it’s a winning formula.

Dell have tried a similar tactic with their latest line of laptops coming in an array of colours and even going as far as getting designers and artists to contribute.

Apple has always understood the need to sell good-looking technology, dating back to the original iMac.

The fact is that if you want people to pay more money then it needs to look good, perform and, in Apple’s case, enhance your status.

Q. Is it possible to say if a Mac or PC is more secure and, if so, why that is?

A Mac is definitely more secure due to the fact that there are few viruses that can infect Macs. PCs need virus protection and sometimes that’s not enough.

Malware exists on Macs but it’s very rare in comparison to PCs.

Q. What do you personally use, PC or Mac, and why?

Personally at home I use a PC but at work I have to use both. For my personal life, a PC is more than enough, but at work we manage the website mainly using PCs and put the print magazine together using Macs, due to the graphic and design applications available.

I’m comfortable on both platforms but tend to find a PC easier to use.

iansplanet - 27 Apr 2017 8:27 AM
Mac without a doubt out-performs, looks better, and is intuitively easier to use than a windows-based PC. MY 2009 iMac died in 2017 and I bought a Windows 10 machine. After two months of trying to understand and use it, I'm now looking for a used iMac or laptop to replace it.