Sometimes old people get an idea fixed in their heads. I’m an old person and guilty of being swayed by pundits who were expecting Apple to produce a slate version of an iMac. Wrong, wrong, wrong.

People like myself have been missing the point about Apple’s iPad. It is vot it is, darlings – an entertainment device with a big screen. It really is an iPod Touch on steroids.

The omission of a camera has been criticised but that’s not important. Who would want to wave an iPad around to take pictures? Why would you want to make phone calls on a Nintendo Wii, take pictures on a Sony Playstation or type your novel on a Microsoft Xbox 360? 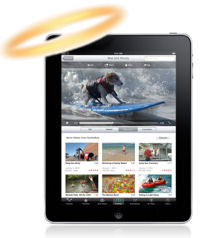 Although the iPad is primarily an eBook reader with music and video players built-in, it shares many similarities to a games machine. If a Wii can do anything other than play games, it usually means forking out for a bit of hardware and nobody complains. Apple’s haunted picture frame comes without a physical keyboard. So what? If you want to type anything in, rather than peck at the on-screen keyboard, you can spend an extra $69 for a Keyboard Dock. The unit holds the iPad upright, recharges the unit, provides an audio output socket and replicates the Apple connector socket it uses on the iPad to allow other add-ons to be used simultaneously.

If you want a camera, you’ll have to wait for a third-party add-on which will stand separate from the iPad, possibly neatly linked by Wi-Fi. Yes, you can play games on it or do some limited business tasks using the current iPhone library or the dedicated iPad apps that are yet to appear.

I’m particularly annoyed with my inflexible thought proceses because I’ve long been a believer that the future computer is the thin client. I mean that in the sense of a client using browser interfaces linked to remote number crunchers in a data centre elsewhere on the planet. Maybe a future version of the iPad will deliver handwriting recognition and come with a keyboard dock, or a BlueTooth keyboard, and be able to output data to a memory card or USB disk. Maybe the current model could be powerful and flexible enough to deliver this with third-party help.

I’ve always envied Steve Jobs’ ability to deliver functional, innovative and eye-appealing products. I do hope he continues to recover from his current illness because he is Apple and the company would lose its spark without him – just as Microsoft seems to have lost its spark without Gates’ daily involvement.