It’s the 2022 Spring conference season and – lockdowns, cancellations, shifts to virtual, other force majeure disruptions notwithstanding – we need to be able to work remotely for the next few weeks.

Having played with various screen extenders and supplementary add-ons for a while now, it seemed fittingly appropriate to get a test unit try-out period with a laptop that is pretty much a desktop machine in disguise – the Huawei MateBook 16 is perhaps that machine.

In a word, this machine is fast. Working with Chrome as our browser on a home broadband connection that usually takes one to two seconds to open a link, the MateBook 16 opens links before you can take your finger off the left click mouse button.

The device itself ships with an AMD Ryzen 5000 Series processor, a core engine unit that is complemented by the new Huawei ‘Shark fin fan’ (it has S-shaped blades as shown here) cooling system.

Huawei says this is its first-ever high-performance Huawei notebook to feature a 16-inch FullView Display. It’s a delightful display, but you probably wouldn’t sit watching television on it and it’s would take up a whole aircraft seat tray, it’s expansive for work though and also suits games for downtime.

We twinned that microprocessor power with the pleasing screen to instal the Xbox for Windows desktop app and plugged in a wired controller before testing out Marvel Guardians of the Galaxy and Gears 4 and 5. The gameplay is as fluid as an Xbox console and the speakers pump out sound that is ‘too loud’ on full volume.

The sound itself is delivered by a front-firing dual-speaker sound system featuring a speaker grille with 3168 holes.

There are also on-edge dual microphones supporting AI noise reduction and long-range sound pickup of up to five metres, so useful for voice clarity in calls and video conferences. To deliver the screen real estate that it does, Huawei has built the MateBook 16 with its now-standard ‘flip-up camera hidden under the F5 key’ to keep the bezel tidy of any camera footprint. This works fine, but it does tend to deliver a slightly up-the-nose view of the user, so clean your nostrils before you Zoom please.

In terms of wider use, Huawei has incorporated multi-device collaboration features so that professional users can twin some functions from their smartphones, tablets, earphones and external monitors across the laptop.

We took this unit on the road and it works well for a heavy-use environment with word processor, social media, image manipulation, video conferencing, email and a handful of other applications all running concurrently. The Huawei MateBook 16 is clearly engineered to be as thin as possible – the body is is only 17.8mm thick and weighs just 1.99 kg or 4.4 lbs – which does indeed keep it ranked as portable, but with the more generous airlines offering 50 lbs in economy, that is almost a tenth of your weight allowance just taken up by your machine. 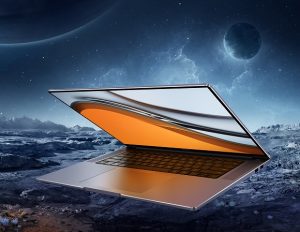 Any colour your like, as long as it’s …. ‘understated space grey’, ok?

According to the style gurus at Huawei, “The MateBook 16 notebook comes in an understated ‘space grey’ colour, which is finished with an advanced ceramic sandblasting process that gives it a textured surface.” Presumably, there is no such thing as over-stated ‘space grey’ – it’s basically professional-looking… you get the picture.

Although we naturally used a mouse with this device, there’s a ‘glass feel’ touchpad that offers tap to click functions. It does not support touchscreen functions, but then it is arguably positioned more for enterprise (or at least professional) use than the kinds of apps with more finger-based interaction.

The display supports up to a 2.5K resolution with a 90 percent screen-to-body ratio. Huawei says that the 3:2 productivity aspect ratio is also more in line with typical productivity use cases, allowing users to more efficiently utilise the display area for work.

“User comfort is also ensured as the display has low blue light emissions and no flicker, making late-nights less taxing on the eyes,” notes the Huawei team.

Users can also switch between ‘performance mode’, which pushes the processor TDP to 54W for full power, or ‘balance mode’ for relatively better battery efficiency. The 84Wh battery is supposed to offer ‘all-day’ battery life… and we have been getting 8-hours plus while on the road.

Wrapping up here then and we also find a ‘fingerprint power button’, a two-in-one fingerprint scanner and power button that authenticates user identity and powers on the notebook at the same time.

On other Huawei devices we have tried this works initially and then loses the fingerprint knowledge after multiple sign-ins for some reason – let’s point out that this could be a Microsoft issue with Windows Hello Fingerprint function in Settings, so it’s worth resetting now and again. This video here shows how to reset this function.

Finally, the dual-antenna Wi-Fi 6 works great for the high speed stable Internet connection we mentioned at the start and the full-sized backlit keyboard that delivers a satisfying typing experience with an ergonomic design.

The Huawei MateBook 16 (RRP £999.99) is available from the HUAWEI Store and retailers.

In terms of final value verdict, this is a hugely powerful laptop that (as of the time of writing in 2022) represents more power than most people would ever have been used to on a ‘tower’ desktop (not that many of us ever use those anymore anyway) – at just short of a grand, it’s actually good value given that a 27-inch iMac would cost you around double that price, but this is a mobile device so it may stand more chance of getting clunked and god forbid dropped throughout its life.

The only question now is whether we would buy one given the need for a new machine – and the answer, based on raw power, would be yes, if we could afford it.

Huawei provided this device on loan. 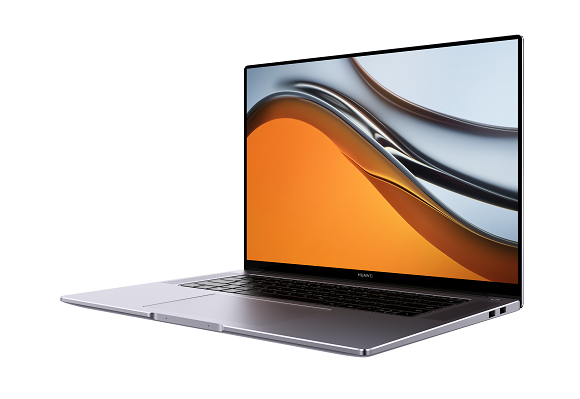