All laptops are pretty much the same today, right?

Open the packaging and you get your basic clamshell unit, a power cable and adapter, a little warranty leaflet that you leave in the back of the drawer where you keep your cooking spoons and – if you’re very lucky – you might get a little cover or protective sleeve of some kind.

But here at the Inspect-a-Gadget testing lab, we’d like to point out that not all laptops are in fact the same.

Okay yes, they’re differentiated by their style of keyboard, screen resolution, RAM capacity and CPU rating, their use of touchscreen technologies (or not, still, in 2020) and their number of connector ports… but it does actually go further than that.

Over the last couple of years, we’ve had a bushel-full of loan/test units that were rather insipid, dull, soulless, tough to get through startup installation and just generally not that appealing – the Huawei MateBook 14 is not one of those machines.

This laptop just feels right. It has a stunning screen that feels like it bleeds right out to the edge of the unit (Huawei calls it its own-branded FullView Display technology) that supports multi-touch usage (i.e. not just click, but pinch and zoom) and it supports up to 2K resolution.

But we’re getting ahead of ourselves, let’s go back to setup. Huawei has built-in a fingerprint sensor which you can set up at first installation. You’ll need to hold your finger over the power button to establish recognition, it takes a while (pull your finger on and off again), but it’s worth it.

Once through installation, start-up is superfast on a new machine, somewhere around a second, perhaps less.

The keyboard is quite a light touch design. It takes just a little while to get used to and although we initially found it a little over-light, we changed our minds and we think it fits the sleek design of the total unit itself. The same style keyboard on the larger than 14-inch models in Huawei’s range (including its Honor brand) might make you feel like you might like something more substantial, but for the MateBook 14 it’s perfect.

Huawei has also hidden the webcam in the keyboard instead of the bezel. It’s the camera icon function key above the number 7 on the keyboard, which pops up upon pressing. This is better for security as it zones in on the user’s body more and there’s also obviously less chance of leaving your camera open if you’re working because you’ll be wanting to pop the 7-key down again after use, right?

We mentioned the extended touchscreen and touchpad multi-touch functionality already, but let’s focus on that for a second and point out some of the features that were thought were the smartest and most functional:

The Huawei MateBook 14 is fitted with an AMD Ryzen 4000 H-Series mobile processor with up to eight cores. This is a high-performance processor that works together with the integrated AMD Radeon Graphics card for everything from gaming to content creation.

A performance mode is also available; when enabled, it pushes the processor up to 40W, giving users the extra power for more demanding tasks such as bulk image editing and coding.

Huawei has also included its Huawei Share technology. This is designed to bring smartphone and laptop use more closely together. What it offers is multi-screen collaboration to control multiple connected devices on a single display.

According to Huawei, “It also enables a range of features, including drag-and-drop file transfer, peripheral sharing, shared clipboard and more. The touchpad comes with a built-in Huawei Share tag. The improved Huawei Share now allows you to answer smartphone audio and video calls through the PC, using the PC’s webcam and microphone.”

Users can also directly open and edit files saved on the smartphone with the PC without having to transfer it first. Most users would need at least a 6-inch plus (approaching phablet) sized phone to do any serious text work, but that’s another story.

The Huawei MateBook 14 has a fairly generous array of port options (especially for an ultraportable… and there are two USB-A 3.2 Gen 1 slots, a full function USB-C, 3.5mm audio jack (although you’ll doubtless be using Bluetooth ‘cans’) and a HDMI port.

The surround sound is surprisingly good, the fact that you only need one charger for both phone and PC is again suprising, but actually rather sensible. Huawei tells us that charging the 56 Wh battery for 15 minutes gives it 2.5 hours of use time. There’s also Huawei’s PC Manager software here, which has functions like Instant Hotspot, Screen Recording, Gallery Management and a function to show recent documents.

The device also has built-in hardware for eye comfort in the shape of its TÜV Rheinland-certified technology to effectively filter excessive blue light. When enabled, it adjusts the display to emit softer tones… everybody say ahh.

The overall impression here is that this is a laptop designed by a mobile specialist manufacturer, which of course it is. But it’s that ‘mobile smartphone company making laptop/notepads’ element that makes this device what it essentially is i.e. ultraportable, but still very powerful. It almost sounds cheesy to say it, but if we were headed off to a web cafe, coffee shop or pub to do a bit of surfing and work, then this would be the device to grab. It’s a lightweight metal body that weighs 1.49kg and is 15.9mm thick.

If there is any downside, it’s Huawei’s massive presence on the web for its smartphones, which are also called Mate devices. This means that anytime you search for a ‘how-to’ or some other bit of background, you’ll get more links to people talking about the Huawei Mate series of smartphones. Okay, that’s Google’s fault and not Huawei’s, but maybe call it the Huawei Buddy 3000 for the next round of product launches guys? 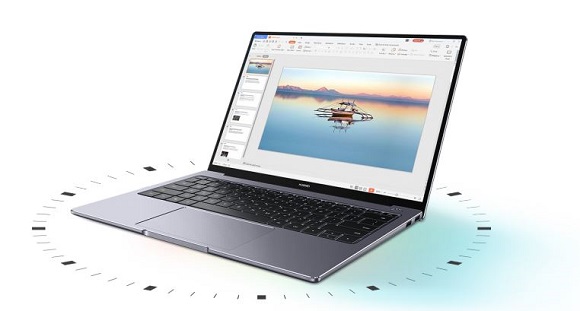 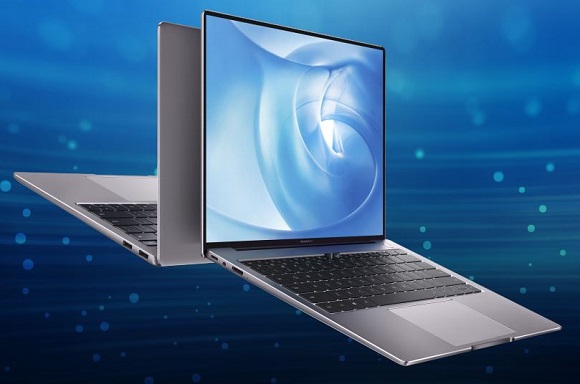