Everyone’s been so iPad mad lately that we’ve started forgetting that there are other gadgets available (as BBC presenters are so fond of saying).  There have been a flurry of product launches in the last few weeks though – time to blog one we liked the look of.

The Mini NB300 is Toshiba’s newest netbook, shipping with Windows 7 Starter or XP Home. Initial specs sound promising too, with 11 hour battery life, 1.66 GHz processor.  We know because we were sent a press release about it, full of quotes saying how ace it is from some people we’d never heard of. Thanks for that anonymous press release donor! 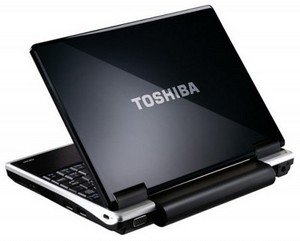 Toshiba’s last netbook, the Mini NB200 was a bit of a bobby dazzler. Powerful, good looking, compact – all that jazz. It was overshadowed a bit by the netbook market’s big, budget performers though – the Dell Minis, the MSI Wind, the Eee PC and even PC World’s own Advent range. It’s a much more crowded market now though.

Musing aloud, typing thoughts half-baked (which is what blogging is for after all), I’m wondering if the idea of a high-end netbook is something of a misnomer, doomed to a slow niche death in such a small slice of market. Aren’t netbooks supposed to be cheapo, portable laptop alternatives? An add on for browsing and typing you can just chuck in your bag? The Dell Mini 10, for example: £230. “Free” with a mobile broadband contract from PC World. Comes in lovely candy colours. Right now, I can get last year’s Acer netbook models, refurbished, for as little as £140. They do everything I need from a netbook. A Dell Mini 9 will even run Mac OS X, with a bit of not-quite-legal tweaking.

That brilliant Toshiba Mini NB300, though? It costs between £270 and £300 new. Dunno about you, but £300 is definitely at the upper end of our netbook finance tolerance. Especially when you can build yourself a quad core, 4GB desktop PC with half a gig of video RAM – as I did last week – for £280. But, that’s another story.

Our question is, I guess, can you market netbooks like phones and laptops? Can you keep adding features and speed and hiking up the price, when the central core of the netbook’s success is actually not features and speed, but ease of use, portability and a low price point?

I think this is the year we’ll find out – because the netbook market has gone from zero to saturation in a meagre 24 months. My suspicion is that the pie can only be sliced so many ways.

By the way, this entry was written on my personal netbook – an eight year old, 12″ G4 Apple Powerbook… It’s a bit scratched and the battery life sucks, but it still does word processing and web browsing better than any Eee PC.  Resale value? About £50…