Who buys those USB turntables advertised in newspapers? Of course, that’s a rhetorical question. We all know it’s the same people who buy five pairs of powder blue chinos for £29.99 and a special tray with a cushion underneath it.

USB turntables are used to turn old vinyl records into digital audio, so you don’t have to buy new CDs or download your music collection from iTunes. There are similar devices for digitising old cassettes too.

Thing is, a USB turntable or tape deck is a specific, one deal sort of gadget – it’s near future obsolescence is implicit in the purchase. In other words, you buy, you use it, you bin it.  At between £70 and £80 a time, that’s an expensive folly. £160 if you buy both devices.

Here’s my advice: don’t bother. Dig out your old vinyl player and tape deck – or borrow someone else’s – and spend £29.99 (or less) on a Behringer U-Control UCA222 instead. It’s a simple, high quality, USB audio interface – about the size of a deck of cards – with phono inputs that connect your old Hi Fi amplifier to a computer.

As for recording, the device ships with the very useful Audacity. It’s open source digital recording software which, incidentally, is the same package bundled with most of the commercial USB Turntables advertised.

And, when you’ve recorded your old tapes and cassettes, the UCA222 will still have some use as an audio interface between your music system, TV and PC – with 48khz audio quality, S/PDIF digital out and external volume controls.  It can even be used it to record your own music or podcasts, and it’s small enough to chuck into a laptop bag. You’ll have saved yourself between 40 and 130 quid and your living room’s still free of redundant clutter. Now that’s what I call music. 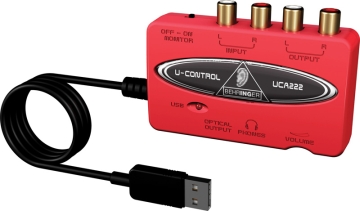