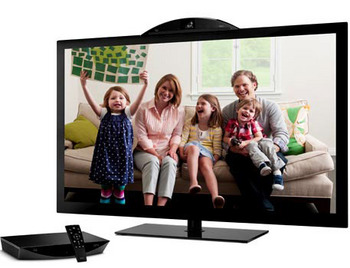 Telepresence. Now that’s a word we haven’t heard much since the 90s… Looks like science fact has finally caught up with science fiction though as U.S. electronics company and heavyweight VoIP provider Cisco announces “umi”  – a device and service combo they’re calling a “home telepresence system”.

In layman’s terms it’s video calling, through your telly.
Umi, pronounced “you-me”, has some pretty impressive specs. There are two parts – a set top box which is, basically, a dedicated computer and a separateTV mounted camera. With up to 1080p video, it’ll plug directly into any HDMI TV. The resolution scales dynamically, based on available bandwidth. Built in microphone and speakers pick up your words of greeting and send them over the ether via the Internet to your Umi owning friends and family. Alternatively, you can connect to PC users as long as they have a web cam and Google Video Chat.
I don’t know about you, but I’ve never felt quite comfortable with video calls – either on my computer or mobile (and Faisal’s views on the subject are just a couple of blog entries down the page) – but this seems like a distinctive step up from the poxy, pixelated video calling we’ve all been used to. With HD quality on your flat screen TV, we can imagine this being a much more immersive, engaging experience. If it works.
Of course, it ain’t cheap. $599 for the kit and $24.99 a month for the service subscription. And it’s not available in the UK. In fact, the only real reason we’re blogging about it is to say “Ooh, look at that. Cool”.
SearchCIO
SearchSecurity
SearchNetworking
SearchDataCenter
SearchDataManagement
Close