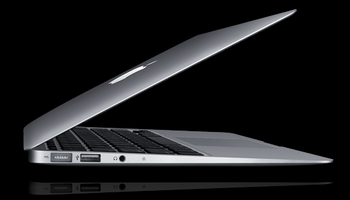 Apple summoned the bedraggled masses of technology writerdom yesterday to make one of its periodic announcements. And there was a lot to announce. The study notes version was:
* There will be a new version of OS X in 2011 with new features in it instead of old features made faster.
* FaceTime, the new video calling app for iPhone is now available for the Mac too.
* The next version of OS X will include an app store, which we think is a pretty clever trick. Why didn’t Microsoft think of that?
* iLife, the Mac’s home centred productivity suite has had an overhaul.
Now to the important bit for gadget fans. The MacBook Air line has been refreshed and includes a new device size that looks suspiciously like a netbook. You know, those things that Steve Jobs said were rubbish and underpowered and that Apple would never make.
But, I’m being facetious here. Of course I am. I’m a technology journalist – that’s my job. The MacBook Air 11.6 actually looks pretty slick.
With a 1.4 or 1.6Ghz core duo processor, the ultra thin, 11 inch laptop features 2GB of RAM, nVidia 320M graphics and a compact 11.6 inch screen. The multi-touch trackpad, however, is the same size as the trackpad on other MacBook Air models. 17 mm at its thickest point and 3mm at the thinnest bit – the well tested unibody design still seems like a staggering feat of engineering. As for the 128GB of onboard memory, it’s solid state. That should make for an ultra-quiet, fast booting machine.
When I finally get one, I want two. The first to use and the second to take apart, just so I can see how they packed everything in there. Of course, savings have been made with zero-redundant components and Apple’s typically forward looking philosophy. Or, aggressive corner cutting for the sake of the seamless design, depending on your viewpoint.
There’s no optical drive, for example. While the larger 13″ model has an SD slot, the MacBook Air 11 incher doesn’t. There are two USB ports though, which is two more than an iPad. There’s WiFi but no 3G. You’ll struggle to load Adobe Creative Suite or Microsoft Office on there without a network connection or external drive. It comes bundled with iLife so you’ll start with a decent suite of office and creativity tools. As for everything else – cloud applications and downloadable apps should see most savvy users through. The launch of the Mac App store and the exclusion of a DVD drive can’t be entirely unrelated…
So, this is a device clearly meant to be used as a second machine, an ultraportable for the road.  It looks geekgasmic – but is it any good? At £849 for the 11.6 inch model (rising to £1099 for the 13″ model) only the most cash flush gadget fans will get to find out. And as soon as we have one, we’ll let you know.
SearchCIO
SearchSecurity
SearchNetworking
SearchDataCenter
SearchDataManagement
Close