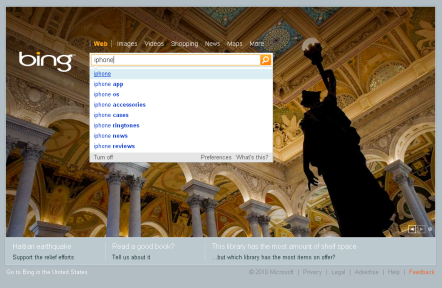 Did you hear that sound? It was the high frequency squeal of a dozen Google execs after they just heard the news: Apple’s iPhone could be switching to Bing according to a report in BusinessWeek

This is one of those deals that looks small, but could be worth lots to Microsoft’s new search engine.  Launched just six months ago, the revamped tool boasts a host of new features – many of them similar to the kind of sterling work that lesser known search outfit Ask.com have been doing for a donkey’s yonk.

Though Bing has doubled the market share it’s predecessor Live Search enjoyed from around 4% to around 8%, it’s still in 3rd place  – way behind Google which attracts 70% of all searches. Stats show Bing’s extra hits have been stolen from Yahoo!, the number 2 search engine, rather than the big G

But, if Bing was the default search engine on the iPhone, that would be a double whammy.  Microsoft would see a big hike in ad revenue (to Google’s detriment). More importantly, it would help win iPhone users over to the Bing side. And there are lots of them.  At least 18 million worldwide, according to a recent AdMob survey.

As with all rumours, take this one with a pinch of your favourite condiment. One thing’s for certain – dominance of the IT space is no longer a two horse race. Rivalry between Apple, Google and Microsoft is likely to be a big feature of the 2010s.