The world and his civil partner knows that today’s the day Window Phone 7 is officially launched. But this weekend mobile game maker RovioMobile decided this was the best moment to take a swing at Microsoft, the world’s largest software developer™

Microsoft has been trailing the launch of Windows Phone 7 over at its dedicated site, showcasing specs, features and forthcoming apps. Somehow the logo for Angry Birds, the wildly successful game for iPhone, found its way onto one of those pages. Did developer RovioMobile have a quiet word with Microsoft, pointing out their error? Did they issue a politely worded statement clarifying the matter. No. Like the titular birds in their app, RovioMobile blew their stack, in a tweet from their official account: 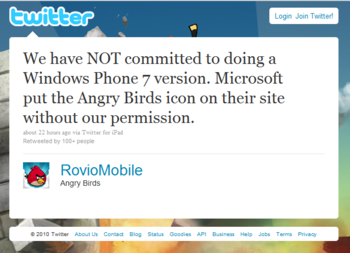 Way to conduct business guys!
Unrepentant, the RovioMobile kamikaze marketing approach begat further tweets of a similarly self-entitled ilk:
“(It’s) nothing to do with if we do or don’t, it’s just that we decide that ourselves.”
“we have not committed to do WP7 yet, we don’t like others using our IP without asking.”
Yeah! You tell ’em, makers of Angry Birds and, erm, More Angry Birds. You tell those piddling fools at Microsoft to stop their intellectual property thieving ways. You stick it to the man, in public, on Twitter. That’s the professional way to deal with these things…
By the way, if you’re reading this in the future, Angry Birds was an iPhone game briefly popular in 2010. You know Microsoft. They’re the guys who own everything.
SearchCIO
SearchSecurity
SearchNetworking
SearchDataCenter
SearchDataManagement
Close