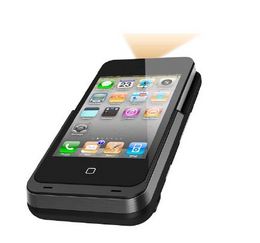 This gadget from Aiptek allows you to project images and browser pages from your iPhone onto a nearby wall. If you want to share an image, video, webpage, map or Tweet with many colleagues quickly, all you have to do is install the free app, attach your iPhone to the MobileCinema i5OS, and hand out the popcorn.
Available since July for £219, the device projects in high contrast (ratio 1000:1) and I am told that the DLP chip used from Texas Instruments is the same used in large cinema projectors which provides the rich colour, deep contrast and sharp definition.
The device has three modes you can switch between, using buttons on the side. There is cinema for colour performance, web for text performance and eco to decrease brightness for power saving. You can project content up to a size of 150cm and there is also a wheel to focus the projection for optimum viewing.
Download the Aiptek app from the Apple app store and when you open it, you will be presented with options to share photos and videos from your gallery, web pages, live projections, social networks, YouTube and Google Maps. 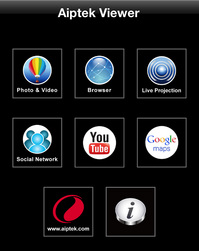 Photos and videos
The link to YouTube through the Aiptek app is instant and easy to use. When browsing through videos it replicates the iPhone and remains in portrait mode, but when you select a video, the projection flips automatically to landscape to play without having to jiggle the phone around.
If you receive a message during playback, the video pauses until you dismiss it. If you choose to read the message the projector will show the “welcome” screen, but then you have to re-enter the app again. So I found it best to use the device with my iPhone in Airplane Mode.
Disappointingly the smooth transitions of the iPhone gallery aren’t replicated on the projection. Swiping seamlessly from one image to the next in an album sadly replicates on the projection in a very clunky format. And the same thing happens when scrolling through Twitter and Facebook.
Social networks
The Aiptek app offers the user to project from Twitter, Facebook or Weibo. But while the device accesses photos straight from your iPhone photos app, you have to sign into your social networks, as they are not accessed through the app. This seems a slightly convoluted way to show a Facebook page or Twitter feed, especially as I can’t imagine this function being used extensively anyway.
Live projection
The live projection option uses the iPhone’s camera and projects this view. This function is great if you want to project something live, say a document on your desk onto the wall. Aiptek advise this mode for sharing documents in a large format, which would be useful in meetings or classrooms. However, the projected image is zoomed in much further than the view on the screen. So if the iPhone screen is showing an A4 page, the wall will zoom in on a paragraph, which I found a bit odd and awkward to judge distances.
Battery life
Charge the device using the USB charger and it will last for 120 minutes in projection mode and the LEDs on the back of the device indicate how much power is left. The device also has the option to charge your iPhone to 80% capacity, which comes in useful as a spare charger, since while using the projector you will be draining your phone battery at the same time. I tested it out as a phone charger as well, and was impressed with the speed of the charge.

What’s missing?
Sadly there is no docking accessory available if you have shaky hands, or even worse, you talk with your hands like me. It would be nice to have the option to place it down on the desk while talking through a webpage. Additionally if you wanted to use it to project a film onto a wall, you don’t want to be holding it for a long period of time. A dock with an adjustable mount would allow you to leave it in one place while watching the projection.
Compatibility
While this particular model is only compatible with iPhone 4/4s, a “dongle” version of the projector will be available for the same price (£219) from September, allowing Apple users to project from other generation iPhones, iPads and iPods as well. 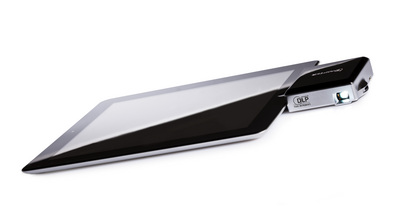 Additionally, a “pad” version will also be available from September at £219, allowing Android smartphones and tablets with a MHL (Mobile-High Definition-Link) interface to connect to the projector via micro USB or HDMI. Unlike the Apple accessories, this product does not need an app to project and will also connect through the HDMI to notebooks, PCs and game consoles.
A very useful little gadget for sharing photos, videos and websites to a group of people, however with the £219 price tag, it is a little steep. Look at the “dongle” and “pad” versions if you are thinking of using it for multiple devices in the office to get the most out of your money.