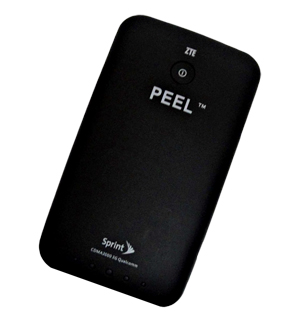 Got an iPod Touch but still afflicted with iPhone envy? A solution of sorts could be on its way to the UK. The ZTE Peel is an accessory that adds 3G powered broadband access to iPod Touch, for as little as $79.99. With a direct dollar to pound translation, that’s about £50.
Made in China, it’s recently been announced that the ZTE Peel is set to debut in the USA on the Verizon network before the end of November.
The device itself looks intriguing. A kind of technologically augmented case, the iPod Touch fits snugly into the Peel. All the gadgetry is packed into the back of the sleeve, making your iPod Touch a bit fatter, but still a comfortable size for a phone.
Add a VoIP app like Skype and you’ll be ready to make calls on your Touch. Nice. One problem though. There’s no accomodation for the iPod Touch 4 camera – so the Peel is only really any good when combined with versions 2 or 3 of the Apple device.
This isn’t the first accessory to add 3G capabilities to the iPod. There have been several such devices spotted in China. But ZTE have a better track record over here. They’re the makers of some well reviewed mobile broadband modems – so have proven expertise in phone network devices that are off the beaten track. Most importantly, they have connections in place with UK networks – most notably Three Mobile. We are officially holding our breath.
SearchCIO
SearchSecurity
SearchNetworking
SearchDataCenter
SearchDataManagement
Close