Ten years ago mobile phones were used for phone calls and texting. WAP was a luxury, in-phone cameras were under consideration and email browsing was an impossible dream. The average mobile call use in the UK was 10 minutes and one text message each week per household. Mobile phones had monochrome screens the size of a commemorative postage stamp and very little memory. RIM’s BlackBerry was classed as a paging device, toying with email and awaiting evolution’s magic touch.

In 2002 RIM launched the 5000 series of email-enabled phones which set the basis for the smartphones of the latter part of the decade. Adding CDMA versions, a protocol widely used in the US, to its GSM range broke RIM into large-scale adoption by corporate America but it took longer to gain any significant presence in the UK.
The BlackBerry phenomenon whetted the appetite of Microsoft for a share of the growing mobile phone revolution and the Windows Mobile operating system was launched in 2003. By this time mobiles were really catching on and the weekly call time had reached 30 minutes but texting had jumped to 15 messages per week.
Microsoft was definitely late on the scene but the obvious link between Windows Mobile and Microsoft Exchange servers had the opposition worried for a while. It was a storm in a teacup, Windows Mobile is still seen as lagging behind the competition.
Motorola was to set the style that made the mobile phone an accessory rather than a luxury. The clamshell design of the Razr in 2004 and its subsequent popularity sent the mobile designers back to the drawing board to come up with all manner of weird and wonderful models.
The introduction of 3G networks in the same year heralded the rise of the smartphone. This was also also advanced by the appearance of larger LCD displays and latterly by touch sensitive screens. The result was the launch of the iPhone from Apple in 2007. 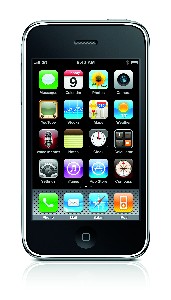 This has proved to be a game-changing smartphone with its gesture-based touch screen being a major selling point. As we leave the 2000s, it seems that everyone else is still playing catch up but the recent Android phones in particular seem to be taking some of the spotlight away from Apple.
Another success for the iPhone was the setting up of Apple’s App Store which made the purchase of software applications easier for the average phone user. Now every smartphone manufacturer has a similar online shopping facility but Apple still has the advantage.
There are now over 77 million mobile subscriptions in the UK even though the estimated total population is only 60 million. By the middle of 2010 it is likely that the number of phonecalls originated from mobiles will overtake the number of calls from fixed landline phones.
SearchCIO
SearchSecurity
SearchNetworking
SearchDataCenter
SearchDataManagement
Close