Bluetooth has come a long way since the days of flashing blue lights and embarrassing ear-wear.

Okay, perhaps the flashing blue lights are still here, but in almost every other way Bluetooth has grown-up, evolving from the frustrating hands-frees of the early ’00s to a flexible IoT platform for a connected future.

Bluetooth 5 is the latest iteration of the ubiquitous wireless standard. Bluetooth SIG – the body that drives its specification – gave Bluetooth 5 the green light back in December 2016 and hinted that the first compatible devices could land ‘within two to six months‘. A little over three months later and Samsung duly obliged with the announcement of the Samsung Galaxy S8, the first smartphone to support it.

So what does Bluetooth 5 do for our connected devices? How does it help developers expand the Internet of Things? And why isn’t mesh networking in the spec? Inspect-a-Gadget spoke with one of the Bluetooth team to get the lowdown on the latest version of the flashing blue tech.

The headlines for Bluetooth 5 are summarised as a comparison with the previous generation, Bluetooth 4.2 LE:

Now, Inspect-a-Gadget tends to err on the side of suspicion when faced with conveniently round numbers in marketing materials, particularly when no absolute figures are given. Enter Steve Hegenderfer, director of developer programs at Bluetooth SIG, to explain: 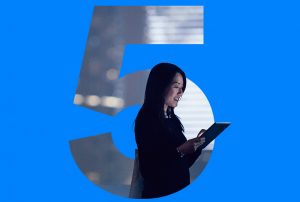 “Bluetooth 5 is evolutionary; it includes the stuff that our members have been asking for for a long time – higher bandwidth, longer range and increased packet size”, says Steve. Pushed for specifics he responds, “Speed is straightforward: 1 Mb/s up to 2 Mb/s”. He explains that it’s actually one megasymbol per second rather than one megabit, but for our purposes it’s essentially the same. “However, you don’t get your cake and eat it – you won’t get 2 Mb/s at 4 x range”, he continues.

“This is one of my religious points”, he begins. “There is no absolute range. Back with Bluetooth audio, it was 7 to 10 meters. With Bluetooth 4 LE there was an effective range of about 100 m, even further with a clear line of sight. But the range could be huge, it depended more on the radio – 350 meters was possible”. So what about Bluetooth 5? “We’ve seen experiments with a drone where range has been well over 700 meters”.

The tests Steve refers to are courtesy of chipset manufacturer Nordic Semiconductor; in this film, the team flies a drone controlled via a Bluetooth 5 radio from the side of a hill in Trondheim to measure how far the signal reaches:

Spoiler alert: the drone operator loses his nerve way before the Bluetooth signal packs in (fast forward to the one-minute mark for the good stuff).

This is an area where Bluetooth 5 may begin to change the game: applications and devices that previously relied on Wi-Fi or proprietary protocols now have Bluetooth 5 as an option too, benefitting from its low power consumption and ease of integration. Steve is quick to stress that the real goal with the range boost is ‘whole home’ coverage irrespective of walls or (within reason) size of house or garden. In a smart home, there should be no technical reason not to employ Bluetooth 5.

Back to the final specs claim: 8 x bandwidth. Steve dispatches this with ease: 31-bytes ‘broadcasting message capacity’ before, 255 bytes now. Technically that’s 8.2258 x but as it’s still early in Seattle when Inspect-a-Gadget calls we’re willing to cut Steve – and the marketing team – some slack.

There’s some other stuff in Bluetooth 5 too, around interoperability and coexistence: channel hopping and slot availability masking means Bluetooth plays nicely alongside Wi-Fi and LTE, important in an increasingly busy wireless playground. All of this while consuming the same amount of power as the previous generation of Bluetooth.

For those rich in time and curiosity, the full 2822-page core specification for Bluetooth 5 can be found here.

One thing not included in the Bluetooth 5 specification is mesh networking. It is frequently flagged as a key topology for a robust and decentralised Internet of Things, extending the range and number of devices that can be connected, and its omission has puzzled some.

“It’s important to understand that mesh and Bluetooth 5 are two different things; mesh wasn’t in the specification to begin with. The developers architecting mesh wanted it to work with Bluetooth 4 radios, with the stuff that’s already out there today, so that a lot of devices could be mesh compatible.”

Steve points out that mesh is built on LE – Low Energy – devices, that not all Bluetooth 4 devices will be mesh-compatible. What’s more, those that are compatible will likely require firmware updates. Yet the desire to open mesh networking to as broad an install base as possible is clearly welcome.

When? “I can’t tell you”, teases Steve, “but I want to. I can say very confidently that it will be soon this year”.

Security is a concern for everybody with a device that connects to a network, and IoT devices present specific challenges. Encryption and all of the other heavy lifting that comes with maintaining device and communication security means processor, speed, RAM and battery – resources at a premium in low-power, low-cost devices – all take a hit. “There is a very tangible cost”, Steve says, “but as we move forward security is going to become more and more important”.

From a specification perspective, the Bluetooth SIG prefers to take a hands-off approach, letting device manufacturers choose the level of security that they’re happy with. “Manufacturers should know their product, know their audience, and build security in from the ground up”, says Steve. “We have an out-of-band security model that manufacturers can plug into, but we leave it up to OEMs to choose the right level for them”.

Surely mesh networking mandates a different approach, though? “Security has been at the bedrock of designing Bluetooth mesh; security will be enforced.”

For Steve, there are a couple of elements that makes Bluetooth well positioned to underpin an Internet of Things projected to grow to 48 billion devices by 2021.

“The Low Energy stuff is extremely important, but also that Bluetooth is everywhere. From a developer’s perspective, it’s cheap to implement stuff – no dongle, gateway or peripheral for a consumer to add on. That’s a big piece of it as well”.

The three major performance bumps with Bluetooth 5 come with a fourth for free inasmuch as the power requirement remains the same. Bolt on better harmony with complementary wireless protocols and the promise of mesh networking that is compatible previous generations of Bluetooth devices, and there are plenty of reasons for developers and consumers to be excited about what Bluetooth 5 brings to the Internet of Things.