The back catalogue of Liverpool’s greatest musical export – and, no, we don’t mean The Teardrop Explodes – are finally going to be available in glorious digital stereo. But, you won’t be able to download them. Not just yet.

I’m writing about it here because, following the model of EMI’s digital exploitation presentation of Radiohead’s first 7 albums, the digital versions of The Beatle’s official long players will first be released on a USB stick. A USB stick embedded in a plastic apple.

The 16GB flash drive will feature all 14 official fab four platters, from 1962’s “Please Please Me” to “Past Masters” – a double set that collects Beatle songs not featured on other albums.  From details released at www.beatles.com, it seems like the digital release, limited to 30,000 copies, will feature all the extras bundled with the recently issued remastered stereo box set – including mini-documentaries and album artwork. The tunes will be presented in lossless 44.1 khz, 24 bit FLAC and 320 Kbps MP3 formats.

While these high quality Beatle releases are very welcome, I can’t help feeling that the famous fab quality control machine has developed a bit of a glitch.  You could argue that the package – an “exquisitely crafted” sculptural replica of Apple Corp’s famous Granny Smith logo – will be an interesting objet d’art; a talking point in years to come.  For me, it’s just 200 quid’s worth of injection moulded Apple; another sign that record companies have yet to find a format as conducive to beautiful design as the 12″ record sleeve. I think I’d prefer to stump up for the remastered CDs and rip ’em into iTunes myself.

The package will be released on December 7th in the UK and, rather ghoulishly, December 8th in the USA; the 29th anniversary of John Lennon’s death. 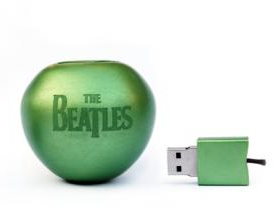