The open season on Facebook (1 Jan – 31 Dec, no sniping on Sundays or religious holidays) continues with the sort of vigour that the media normally reserves for footballers’ wives and anyone who’s ever been in a talent show. Facebook brought some of this upon themselves with their repeated, poorly-publicised and complicated revisions to their privacy policies. But yesterday’s ‘headline‘ was that a researcher has used a script to skim all the public domain text from the social networking site and compiled it into a single file.

The only data in the file (which as someone who doesn’t frequent the torrents, I don’t have a copy of) is apparently the public domain information on Facebook – anything which was set to ‘private’ was not accessible. The file is only a few GB in size, which suggests it’s just text (please correct me if I’m wrong), so the richness of the pictures isn’t in there.

If the facts have been reported correctly then from a legal perspective nothing has happened here. Someone has taken a large volume of searchable public domain information and put it into a file where it is searchable. Data Subjects gave their consent to the publication at the time they originally published it. Of course there’s likely to be material in there that is subject to intellectual property rights, but it wasn’t our researcher who put it onto Facebook in the first place. I imagine that a skilled grep-er could find information in there that isn’t easily spotted using Facebook’s own search tools, and that some interesting patterns might emerge, but I’d also imagine that much of the context and interconnectivity of the information was lost in the download process, so it’s swings and roundabouts for the value of the offline data.

And yet… and yet… the media still throw up their hands in horror and cry that the death of privacy is upon us. That may be so, but it’s not because someone’s downloaded Facebook. Our problem is that in modern society we seem to think of privacy as being a form of urban anonymity* – less ‘the right to be left alone,’ and more ‘the right to do whatever the hell we please because nobody’s going to know who we are when we do it’.

This is not privacy, but an uncontrolled and irresponsible form of pseudonymity, where we assume that people don’t know our other personae: the ‘me’ on Facebook isn’t the ‘me’ at work or the ‘me’ that visits my parents or the ‘me’ that goes down the pub. These are all legitimate personae that we choose to portray, but we keep them from others because they simply don’t mix. Our fear stems from the threat of those personae ever getting together in public with a few drinks and telling the world who we really are. Once that happens, it’s all over for privacy under the urban anonymity model – there’s no way to separate those personae once their interconnectedness has been made public (particularly if your boss – or worse still, your mother – finds out what you did down the pub). 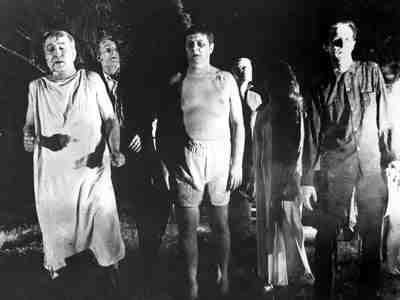 It’s never pretty when your various personae get together

So perhaps it’s time we look to a pre-industrial past for fresh concepts that will help us to understand privacy in the age of social networking, and to respond to non-incidents such as this in a more meaningful way.

Our current model is one of urban anonymity, but is that a reasonable model for the Internet? Surely we actually engage in communities? The Internet may provide an enormous anonymous backdrop, but most of what we do within it is community-driven, with those communities bounded by interests, professions, territories, applications, providers etc.

In a small community, there is no anonymity: everything you do in a public place is public knowledge. Your childhood sweethearts, exam successes and failures, your drunken teenage nights, health problems, run-ins with the police, financial problems – anything that happens in public becomes public domain, and you are completely identifiable by your peers when it happens. Yet village communities rarely seem to schism, ostracise or generally form lynch mobs (except when it’s as part of the local tradition, of course). Because everyone’s life is a matter of public record, and sooner or later everyone says or does something in public they’d sooner forget, then that quality of forgetting becomes embedded in the community: even if we can’t forgive, we choose to forget because we hope others will do the same for us. Otherwise we’d never venture out of our houses for fear of twitching net curtains.

So is this a valid model for considering how we use the Internet? I think so. We don’t go searching for embarrassing things online done by complete strangers (well I don’t anyway) unless they are truly staggeringly stupid/naked/funny, but we are interested when even a minor incident involves someone we know, or who exists within one of our online communities. Those are people that seek forgetfulness, and from whom we may require that forgetfulness to be reciprocated. The Internet itself won’t forget anything, so there’s no point in trying to erase the evidence.

As adults we fret that the re-appearance of a photo of teenage high spirits (i.e. that one wearing nothing but a pair of pants on your head and a winning smile) may come back to haunt us, but younger generations will have learned to see the Internet for what it is: a global network of interconnected communities, rather than a homogenous mass of users. Maybe they’ll be better at forgetting than we – or computers – will ever be. And maybe they’ll come up with a more grown-up model for online privacy than we currently use.