Over the next few days I’m going to focus on a number of important stories that relate to freedom of speech, and the unfortunate consequences of using that freedom to say something silly.

How many of us had heard of Fitwatch last week? Certainly a lot fewer than have heard of them now. If you’re not aware, FITwatch is an organisation that follows Police Forward Intelligence Teams – officers who use cameras to record individuals engaged in demonstrations, for identification and intelligence purposes. When protests turn ugly and unlawful, such as they did at Millbank last week, there is obviously a legitimate need to monitor, identify and arrest the miscreants. However, the FITs have come in for considerable criticism from civil liberties protestors, particularly for recording individuals engaged in legal and peaceful protests, which are, after all, within their fundamental rights. There have been allegations of FIT officers failing and refusing to reveal their identity numbers, and harassing journalists engaged in their lawful work. The attitude and delivery smacks of the surveillance state, since the inevitability of ending up on a database somewhere will be a deterrent for many people considering exercising their legal right to protest.

So, FITWatch is there to turn the cameras on the FITs using sousveillance, and to peacefully obstruct their cameras in whatever way they can. It’s a commendable mission, and one which forces reflection on the policy of treating anyone who protests as a dangerous activist. But after the Millbank fiasco, Fitwatch went too far, and provided explicit advice for protestors:

If you fear you may be arrested as a result of identification by CCTV, FIT or press photography;

DONT panic. Press photos are not necessarily conclusive evidence, and just because the police have a photo of you doesn’t mean they know who you are.

DONT hand yourself in. The police often use the psychological pressure of knowing they have your picture to persuade you to ‘come forward’. Unless you have a very pressing reason to do otherwise, let them come and find you, if they know who you are.

DO get rid of your clothes. There is no chance of suggesting the bloke in the video is not you if the clothes he is wearing have been found in your wardrobe. Get rid of ALL clothes you were wearing at the demo, including YOUR SHOES, your bag, and any distinctive jewellery you were wearing at the time. Yes, this is difficult, especially if it is your only warm coat or decent pair of boots. But it will be harder still if finding these clothes in your flat gets you convicted of violent disorder.

DO think about changing your appearance. Perhaps now is a good time for a make-over. Get a haircut and colour, grow a beard, wear glasses. It isn’t a guarantee, but may help throw them off the scent.

DO keep your house clean. Get rid of spray cans, demo related stuff, and dodgy texts / photos on your phone. Don’t make life easy for them by having drugs, weapons or anything illegal in the house.

Personally I think that’s all rather silly, partly because it is providing advice to individuals on how to hide from the consequences of criminal acts, and partly because anyone stupid enough not to cover their tracks frankly deserves what’s coming to them with a little extra thrown in for good measure. 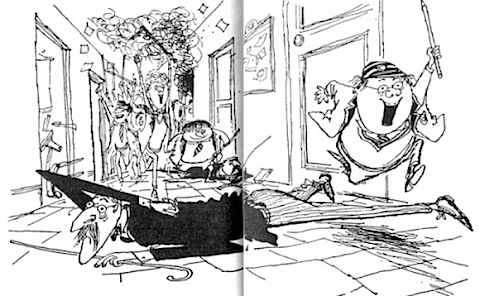 Students – love ’em or hate ’em, you’re not allowed to hit ’em with a spade…

But enough of that. The Metropolitan Police clearly didn’t like this, so CO11 got on to Fitwatch’s hosting provider and demanded that they take down the site and IP, which they did. Just like that. On the say-so of a Detective Inspector, the site was gone. No court order, no independent review, no scrutiny. And that’s just plain wrong in a country that once prided itself on both freedom of speech and freedom to protest. A few hours later, the police released images of the individuals they wish to interview, many of which were doubtless captured by the FIT team.

However, CO11 might be up to the task of taking down a website, but clearly someone there doesn’t quite get how the Internet works. Far from silencing Fitwatch, the effect has been to drive traffic to the numerous mirrors, caches and aligned sites that replicate all the offending content. Their Twitter followers are rising rapidly, there’s a busy Fitwatch meme on the go, political bloggers are all over the story, and the Fitwatch site will probably be back up by the time I finish typing this article. This time it’ll be hosted in a country that has a greater respect for freedom of speech than the UK, and then it’ll be pretty much impossible for the Met to shut it down. At the end of this process, many more people will know about the FITs, Fitwatch, and what happens if you upset the Metropolitan Police. In fact I’ll bet that the Fitwatch folk are delighted with this turn of events, and hopefully they’ll refrain from trying to assist offenders in future, and instead stick to doing what they do best – and good luck to them in that endeavour.

This incident demonstrates the futility of trying to silence free speech. Nobody is going to rally round for the right to incite violence or distribute child pornography, but when the authorities try to stamp on freedom of expression, even if that expression is rather misguided, then they’re going to feel the wrath of the Internet. Someone in CO11 needs to go back to skool [sic] to understand that if they really are hell-bent on intelligence gathering, then shutting down activist websites is not the way to go about it.

PS – For the avoidance of doubt, I wholeheartedly applaud every person who protests peacefully for their principles, but condemn the small minority who were engaged in the storming of Millbank tower. It only gives the State an excuse to suppress the rights of protest of others.

PPS – Please excuse the numerous Wikipedia references, but it seemed appropriate that in an article about students I shouldn’t bother to look for other sources [citation needed]