Downtime regulars may already know that in future, we won’t own or buy stuff anymore, we’ll all share with everyone else in a big, cuddly, let’s-all-have-a-spliff-around-the-campfire, tree-hugging kind of way. To make this concept credible and allow politicians and business leaders not to appear like 1960s hippy day-glo wackos when they talk about it, we have to call it the “sharing economy”.

The darling of the sharing economy is Uber, the firm that allows you to get a cab from someone who used to hang around Leicester Square in London on Saturday nights whispering, “Just £10 cab to zone 2. Take anyone to zone 2 super cheap” to lost-looking passers by.

But what you may not realise, is that hailing taxis through a smartphone is just the start of Uber’s plan to be the hub for sharing all of creation. To prove this, on National Cat Day (no, us neither) Uber launched its latest service – Uber Kittens. As if there weren’t enough of the cutesy creatures infecting every corner of the internet, Uber offered customers in selected US cities the opportunity to share a kitten. You get 15 minutes with an Uber-delivered kitten, at the end of which you can return the flea-ridden poop-fest or decide to rather ruin the business model by adopting it.

What next? Is there nothing that Uber and its sharing economy cohorts will not attempt to time-splice into our lives? What about children – just think, if you could have your kids delivered to home between the hours of 3-7pm when there’s something decent on CBeebies to keep them occupied, then stick them back into the cab for someone else to bathe them and read a bedtime story.

How about Uber Spouses? Uber Bosses? Uber Beer? The possibilities are endless. At least Downtime can be assured there is no future in Uber Journalists – far too valuable a commodity to ever be shared round the digital campfire. * 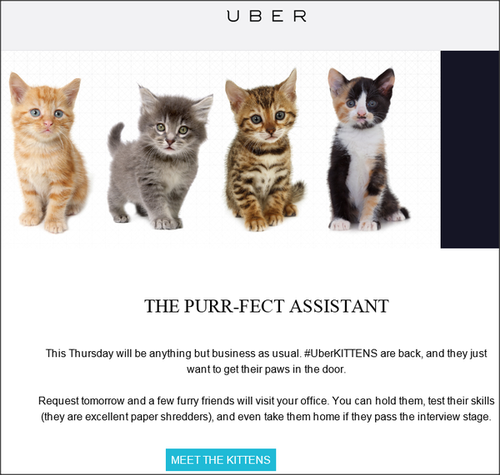