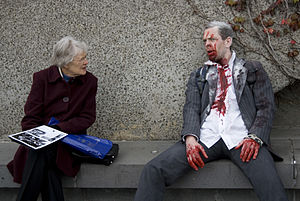 How many times have you got on a crowded tube or train, glared at people around you through bleary eyes and thought: “Am I going to get out of this carriage without my brains being eaten?”

That can’t be just us at Downtime? Can it?

Well, apparently the similarities of crowds of commuters and blood thirsty zombies have been picked up by Essex University too and inspired their research.

The institute has used a zombie computer game to gather data on how people react in crowds, discovering that rather than following the herd, stressed people were more likely to go out on their own.

The idea behind the research is so we can learn how best to advise people in evacuation scenarios. However, as big fans of House of the Dead 2, we reckon there may have been a little bit of fun involved during working hours too.

Now, all you have to decide is your weapon of choice? We favour cricket bats and Dire Straits vinyl…