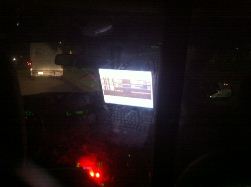 You’ve been arrested by the police. You’ve done something quite embarrassing. Things aren’t looking good for you, so what do you do?

Noah Everett tweeted to his 2.8 million followers that he was “Getting arrested…in the back of a cop car now,” at 2am (EST) last week.

He then followed that up by tweeting “Proof” with a Twitpic of a photo of the inside of a police car.

Now, I think it’s very commendable that Noah decided to stay true to his beliefs and his product by ‘twitpic-ing’ the event.

It shows real belief in the product no matter the circumstances. Similar to the Marlboro man smoking until he died of cancer.

If you’re wondering why Noah, biblical name you know, was arrested in the first place, he clarified the matter with a couple more tweets.

Saying “…I guess you can’t walk down your own street half naked…who knew – I got a free ride home by the nice police officer,” following up with “…by half naked, I mean naked.”