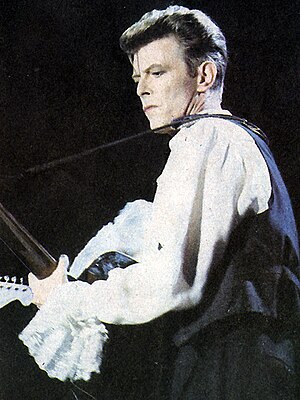 appreciated. But with a major retrospective at the Victoria & Albert Museum, and his first album for a decade, it is time to reassess Bowie’s influence on the development storage arrays.

Bowie’s  interest in storage began early in his career, with his 1967 debut anticipating the rise of the Massive Array of Idle Disks, some two decades before they become common place in the IT department.

Maid of Bond Street will always remain a landmark work in the history of storage innovation.

For many, Ziggy Stardust is the  apogee of Bowie’s storage career.  Who can forget Bowie’s prescient call for data deduplication technology  in his 1972 song Five Years. “My brain hurt like a warehouse,” Bowie cried, “I had no room to spare. I had to cram so many things to store everything in there.”

But to let Ziggy eclipse Bowie’s influence on storage would be folly.  Aladdin Sane, inspired by Aladdin Knowledge Systems, has much to teach us.

Indeed, Sane, more than any other of Bowie’s characters, reminds us of the vital role of  the Storage Area  Network Extension, in our fractured society.

It would be folly to disregard Bowie’s Berlin period, when developments in data retrieval technology inspired Bowie to replace glam rock, with a harder techno-sound.

What starker reminder could there be about the dangers of poor disaster recovery planning, in Bowie’s prescient song, “Always crashing in the same car”  ? We could indeed be hero’s if only we had dual redundant data centres.

Next week we consider Tim Machine’s impact on the Server Market.

What are your favourite Bowie storage tracks ? Email me at wgoodwin@techtarget.com and I will publish the best entries.