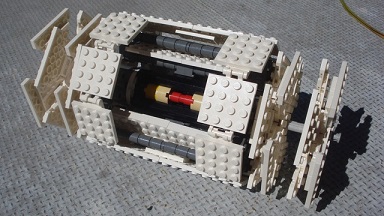 The Large Hadron Collider has scientists, techies and geeks around the world salivating at the possibly world changing physics experiments taking place in the underground lab. Yet few of us get to come anywhere close to the futuristic location or get a closer look at how it is built.

However, one scientist is trying to change that all thanks to the wonderful world of LEGO.

Sascha Mehlhase created a 4,500 piece scale model of the LHC back in 2011 but this was a tad too big to fit in the back of a car for the ride home. Now he has taken the specific ATLAS experiment from the bunker and made a 560 piece kit he has now hoping the manufacturers will start selling as official LEGO gear.

Mehlhase is seeking out votes on the LEGO enthusiast site Cuusoo and if he reaches 10,000 he will be in the running to go into production.

It may still cost $100 but here at Downtime we never got over our LEGO obsession and would love to play Professor Higgs on a Sunday afternoon. We are sold!