Proxama PLC has teamed up with Paythru to create a Near Field communication (NFC) system that allows the public to make a donation to the Poppy Appeal via their smartphones.

Posters and collection tins have been spread across Birmingham urging people to ‘tap the poppy’ in order to donate. Contactless, wireless and secure communication then transfers information and money between the user’s smartphone and the NFC tag via antennae communication.

Rupert Potter, Director of Strategy, Paythru said he hoped this new way of donating would increase the size and frequency of donations to the cause.

For those who don’t have NFC enabled devices, QR codes will also be available. If your smartphone doesn’t allow QR scanning, then you’re just going to have to follow the traditional route and buy a poppy, badge or wristband.

This year’s Royal British Legion Poppy Appeal aims to raise £37 million to support the British Armed Forces past and present, and their families. 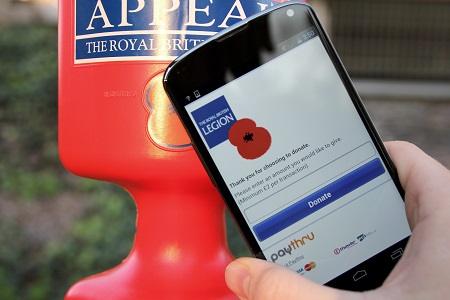