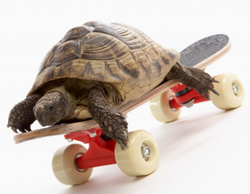 Summer’s here, and it’s time for Downtime to bring out its favourite picture of a skateboarding tortoise. Yes, the silly season is closing in.

Mobile phone comparison site TigerMobiles.com recently commissioned polling agency Carter Digby – to conduct a ‘survey’ that has allegedly found that the smartphone is killing off everybody’s sex life… yours, mine, even Mrs Henderson at number 37’s.

The rigorous ‘survey’, with a sample stretching to hundreds of thousands, conducted over many years, employing double blind techniques that was then extensively peer reviewed in leading academic journals …

The ‘survey’ found that 75% of couples sit in silence browsing social networks “on a night” … whatever that means, whilst a “shocking” 40% turned down the “advancements” of their partner in favour of playing on their phone.

Even more horrifying, 74% said they got angry when someone interrupted them while using a smartphone, and the vast majority of dining room tables have achieved sentience and set up social media accounts.

No, you’re not misreading, for I quote…

“85% admitted to texting or social networking the dinner table.”

Coming soon, Terminator IKEA: the Rise of the Wobble.

Sorry, where were we? Oh yes, shagging. The ‘survey’ also found that 18% had checked their phone during sex, cause for panic, according to TigerMobiles marketing director Rob Myers.

“More couples are sacrificing their sex lives for addictive apps and the materialistic world of Facebook and Twitter. Fun between the sheets is disappearing down the drain for something that didn’t even exist 10 years ago and the figures are shocking.”

Downtime would argue that when the human race is down to its last few hundred people, either through disease, war, climate change, our imminent subjugation by Cthulhu (pictured left) or whatever, you can worry about fun between the sheets disappearing down the drain.

Look, there are seven billion of us and rising. I’m not worried about a few bored people whose relationships were doomed anyway texting.

Maybe they were on Tinder, setting up their next casual fling. Did you think of that?

Help is at hand, thankfully, for the survey provided some tips for taking back control of your sex life from those terrible smartphones.

The tips basically amounted to:

1.       Use your phone as a sex toy (no not in that way) by sending cheeky texts or Snapchat messages. Super fun, and excellent blackmail leverage for later.

2.       Exercise some self-control and put the blooming phone away.

Simple when you think about it.