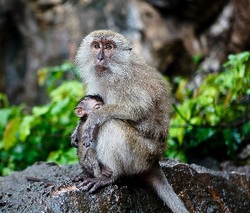 Those struggling to access rural broadband services can thank their lucky stars that they don’t have to deal with monkeys.

In India, reports BBC Monitoring, the government of Narendra Modi is currently undertaking its own version of BDUK on a massive scale, and hopes to lay over 430,000 miles of fibre cable to connect 250,000 village clusters by 2018.

However, in Prime Minister Modi’s own constituency of Varanasi in Uttar Pradesh, the works have been halted by sacred monkeys.

According to the news service, local officials in Varanasi are unable to stop the local population of macaque monkeys from stealing and even eating the cables.

The city government is at a loss to stop the monkeys because they are considered avatars of the Hindu god, Hanuman.

“We cannot move the temples from here. We cannot modify anything here, everything is built up. The monkeys, they destroy all the wires and eat all the wires,” communications engineer AP Srivastava told Reuters.

The authorities are looking into alternative arrangements to bring fibre broadband to Varanasi, but the densely built-up city environment makes this very hard.

If Mr Srivastava is open to suggestions, Downtime proposes supplying the monkeys with their own tablets. Once they’re addicted to social media they’ll soon realise the error of their ways.