With the Olympics just days away, London will not just be flooded with athletes, but also the rich and famous, who somehow managed to score tickets in the lottery – convenient hey? 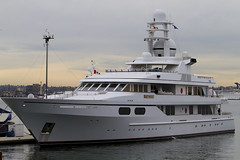 Where there are celebrities, there are parties and the hotspots of the capital will be rolling out the red carpet to squeeze them all in.

But, it seems the hottest ticket in town isn’t for Mahiki or a table at The Ivy, it is on a yacht in Canary wharf, owned by none other than Microsoft co-founder Paul Allen.

Yes, even The Sun is reporting on the exclusive shindig, which claims to have Brad and Angelina on the list, as well as the lesser photographed Bill Gates.

We wonder whether Steve Ballmer will show up and make a show of himself. With that bellow you would be able to hear him from the Olympic park if he had one to many Pimms in the sunshine.

But, whoever does turn up, we are just glad that the tech geeks are showing they don’t just know how to code, they can party too. Expect copies of Windows 8 in the goodie bags though and perhaps one of the many left over Nokia Lumias…