Latest Blog Posts
Related Content
BlogRoll
Latest News
Download Computer Weekly
The past few months has seen Apple suing companies like its going out of fashion. Proceedings against HTC and Samsung, for apparent infringements on their design patents, have been major talking points of late but now Apple have filed a trademark infringement lawsuits against two stores in New York.
The shops, which Apple representatives, who may well have been dressed in long jackets, fedora hats and fake moustaches, have visited on “multiple occasions over several weeks”, are allegedly selling unauthorized cases, headphones and other accessories for the iPhone, iPad and iPod.
The billion dollar company are claiming that the products in question were all emblazoned with its familiar fruit shaped logo, as well as the phrase,”Designed by Apple in California. Assembled in China.”
US District Judge Kiyo Matsumoto must have put a smile on Steve Jobs’ face when he granted an injunction, stopping the stores from selling the alleged knockoffs. However, he hasn’t yet decided whether one of the stores, called ‘Apple Story’,  will have to change its name.
Apple, who certainly aren’t short of a bob or two, are also seeking undisclosed monetary damages, which Steve Jobs may well give to Acting CEO Tim Cook as pocket money, and asking that all existing counterfeit goods be destroyed.
A Fake Apple Store in Chang’an (Source: achimh on Flickr ) : 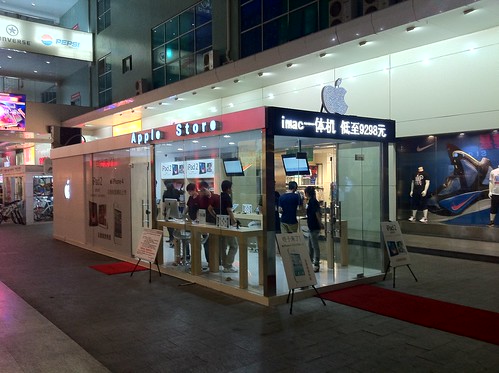