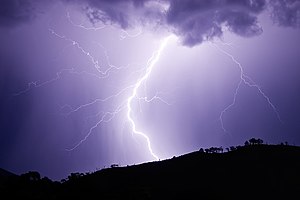 This image was selected as a picture of the week on the Malay Wikipedia for the 51st week, 2010. (Photo credit: Wikipedia)

Thunderbolts and lightning may be very, very frightening indeed, but it seems they could give us gadget junkies a funky way of charging our phones.

Researchers at the University of Southampton have successfully conducted an experiment to charge a Nokia Lumia 925 by simulating lightning.

The scientists managed to transfer 200,000 vaults across a 30cm gap into a smartphone and the energy from the light and heat gave the device the juice it needed.

“We were amazed to see that the Nokia circuitry somehow stabilized the noisy signal, allowing the battery to be charged,” said the University’s Neil Palmer.

“This discovery proves devices can be charged with a current that passes through the air, and is a huge step towards understanding a natural power like lightning and harnessing its energy.”

So maybe when the next Thor movie comes out, we will see him not only saving the world against his brother but charging the devices of the planet too. That is the sort of superhero we are after…