Google is planning to launch glasses that have a display in the lenses powered by smartphone technology, the New York Times reports.

The glasses will be used to confuse annoying businessy types that already knock into everyone by looking at their phone constantly with the intention of blinding them with not only ignorance but also technology.

The glasses will run on Android and will stream augmented reality apps such as Google Goggles (which identifies objects and gives information on them) and Google Maps (a mapping tool).

The information is received through a 3G and GPS connection allowing the brain to not only contract cancer quicker but also removing any need to store knowledge.

You will be able to control the device using eye movements. 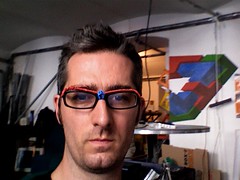 The glasses will also feature a front-facing camera so you can record anything you’re looking at. This will be extremely useful to geeks that wear glasses when they are faced with losing their virginity as they will be able to relive those glorious seconds many times over making the £50 they paid well worth it.

Future upgrades will allow the user to project their thoughts using the camera and the ability to attach dental equipment in order to help align the user’s teeth. This attachment will be controlled by the user’s tongue which, I’m sure you’ll agree, is a pretty exciting proposition.