A Furby accused of divulging important US military information has called on the UK government to block its extradition to the US.

Back in 2000 the Furby repeated a conversation it overheard when one of its owners parents, a senior US army official, was discussing secret arms information on the phone with a colleague. 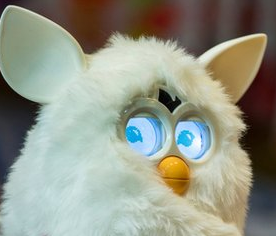 The Furby became surplus to requirements for the official’s  child and was sold in a car boot sale.

In 2005 the US called for the Furby’s extradition to face spying charges in the US.

The Furby has been to The European Court of Human Rights to get the extradition overturned. But was devastated that a Furby is not protected under European human rights law.

The Furby has generated significant support from politicians, journalists and pop stars. U2’s Bono visited the Furby at its South London Home only last week. He said the Furby is in good spirits but the case is taking its toll.

The legal team behind the Furby said by repeating the information it heard from its previous owner was just evidence that it was a normal Furby and it should have its case heard in the UK.