Christina Aguilera made a mistake that will probably cost her her life… she took what Wikipedia says for fact.

Kicking off the Super Bowl, Aguilera messed up the lyrics to the American National Anthem (only the greatest national anthem in the world). 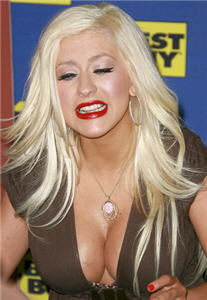 What Christina should’ve sung was: ‘Whose broad stripes and bright stars, through the perilous fight, O’er the ramparts we watched, were so gallantly streaming.’

Sadly she went for ‘Whose broad stripes and bright stars, through the perilous fight, What so proudly we watched at the twilight’s last gleaming.’

Normally a public hanging is in order but where the blame lies is a bit of a mystery. While Aguilera made the mistake, the incorrect lyrics seemed to match that of Wikipedia.

A re-enactment of the fateful incident shows Aguilera quickly running over to her Commodore 64, Googled ‘American National Anthem lyrics’ on AltaVista and copied and pasted the lyrics into Word ’97 from Wikipedia before printing it out on her HP inkjet.

We’ve all done it. But this time over 100 MILLION PEOPLE watched. It’s like a massacre.

Miss Aguilera, if that is her real name… I would like to call her Miss Infidel, apologised for her mistake, telling CNN: ‘I got so lost in the moment of the song that I lost my place.’

Yeah whatever, you lost your soul too.

She continued: ‘I can only hope that everyone could feel my love for this country and the true spirit of it’s anthem still came through.’

The anthem will always have spirit, but the only spirit to live inside you is the one that comes out of a bottle.

There was a public outcry on Twitter with floods of tweets hitting the world wide web.

Twitter user Lord_Voldemort7 said: “Did Christina  Aguilera just screw up America’s National Anthem? Wow, and I thought it was bad when I screwed up trying to kill that baby… ”

Just in case you’re not aware, that baby was Harry Potter.

Indeed, you are not as evil as we first thought Lord Voldemort.