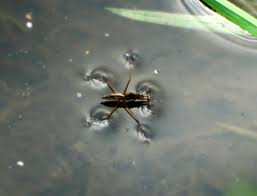 OK, China creates advanced microbot that walks on water – we are not talking R2D2 or C3PO – but not only does this micro-gizmo walk on water, it can jump too.

It may not be as fast as grease lightning, but it is superhydrophobic, which is what makes it special.

Over the past few years, several robotics labs have created tiny bots that are able to walk or skate across the surface of the water, but this is the first that can jump

The microbot was inspired by a kind of water-hopping insect called a water strider, but making a jumping robot is difficult because the downward force needed to propel it into the air usually pushes the legs through the water’s surface.

Robot engineers at Harbin Institute of Technology and the National Natural Science Foundation of China looked for novel mechanisms and materials to build a true water-striding robot, according to reports.

Using porous, superhydrophobic (super water-repellant) nickel foam to make the three supporting and two jumping legs, the group made a robot that can jump about 14 centimetres high and 35 centimetres forward, even though it weighs more than 1,000 times as much as the insect it imitates.

A jumping robot water strider is more agile than a skating one, so it’s able to avoid obstacles, the robot’s creators, wrote in a paper published 25 July.