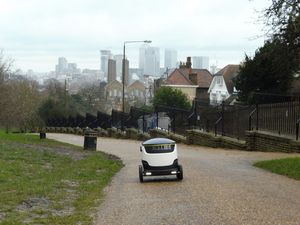 Look at this adorable little robot. It was developed in Estonia (by scientists) but as you can see from the photo, it is currently on trial in Greenwich in south-east London, where it is being used as part of a smart city pilot exploring automated delivery services.

Which is all well and good in thoroughly middle-class Greenwich, where it is hard to move for artisan antique restoration boutiques, knit your own yoghurt emporia, organic kale and quinoa smoothie pop-ups, and combination champagne and cheese bars (one of these things does actually exist in Greenwich, try to guess which one).

But until humanity’s inevitable subjugation at the hands of our future AI overlords, technology is only as good as the humans who use it, and remember, robots aren’t allowed to fight back.

What happens, then, when it wanders into a bad neighbourhood or falls into the hands of an enterprising criminal? Probably stripped of its copper wire and up on bricks within five minutes if it took a wrong turning.

And what of the Amazon Prime delivery it was carrying? Stolen and flogged down the market, in all likelihood. “Fell off the back of a robot, guv,” would be the new call.