It’s taken twitter three years, but at last its changed its homepage. 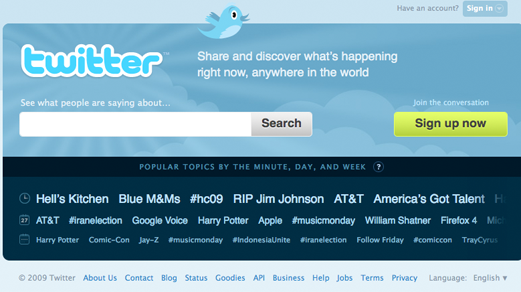 This only appears if you’re not logged in, so its mainly the face of twitter for the un-initiated.

What has changed most is the way twitter describes itself…. no longer does it says “What is twitter?”

Followed by a rather clumsily worded explanation (and overly American – co-workers, urr??) that said:

Twitter is a service for friends, family and co-workers to communicate and stay connected through the exchange of quick, frequent answers to one question: What are you doing?

Now the new homepage is more welcoming and clearer – twitter has grown up and evolved so it now understands its role. So it now says:

So the status update-style explanation has gone and has been replaced by a view that has been shaped more by the users than the founders of twitter – that’s the great thing about success stories on the web their use evolves and is shaped by the audience.

The new explanation is based on sharing, collaborating and participating in online conversations in real time with people who you may or may not know anywhere in the world. That’s quite a change from where it was in 2006.