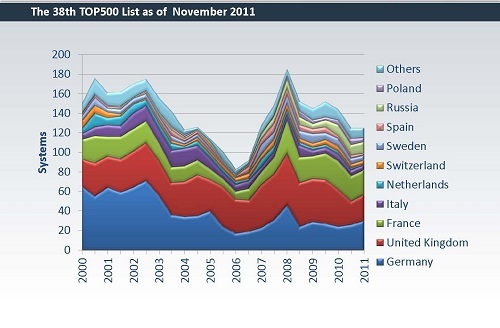 The UK is the fourth largest user of supercomputers worldwide, with 27 of the fastest performing machines from the Top 500 list. The USA has the largest installed base, with 263 of the top 500 fastest machines. China has 74, and Japan 30. The UK is followed by France with 23 of the top 500 machines, and Germany 20.

Supercomputers are seen as a strategically important resource. Although the USA has the greatest number of high performance computers. Japan owns the most powerful machines.
The Japanese K computer, for example, has a capacity of 10.51 Petaflops, over 5 times the performance of the fastest US computer, the Jaguar, which has a speed of 1.8 Petaflops.

(One Petaflop is equivalent to 1,000 trillion floating point calculations a second.)