So I now had the basic machine up and running. This took roughly ten minutes. Again I needed to setup Wi-Fi. Last week I was a complete Linux novice and it took the whole weekend to setup the eeePC. This time I took a different approach which had me up and running in under an hour. The first thing I needed to do was make the eeePC run in Advanced Desktop mode.

To get this going I decided to use synaptic, the GUI-based package manager for installing software. Once you get the hang of it, it’s easier to use the synaptic package manager than running apt (advanced packaging tool) at the command-line.

But first I needed to start synaptic. So I opened up a terminal window (ctrl-alt-t) and typed:

Once synaptic opens it checks what packages are installed and what is available Io download from the various Asus eeePC repositories of packages. This takes a minute or so to update. I then clicked on the section button in synaptic to organise the packages by type then clicked on “base system”. Highlighting “the advanced-desktop-eeepc” in the right window brings up info on this package: 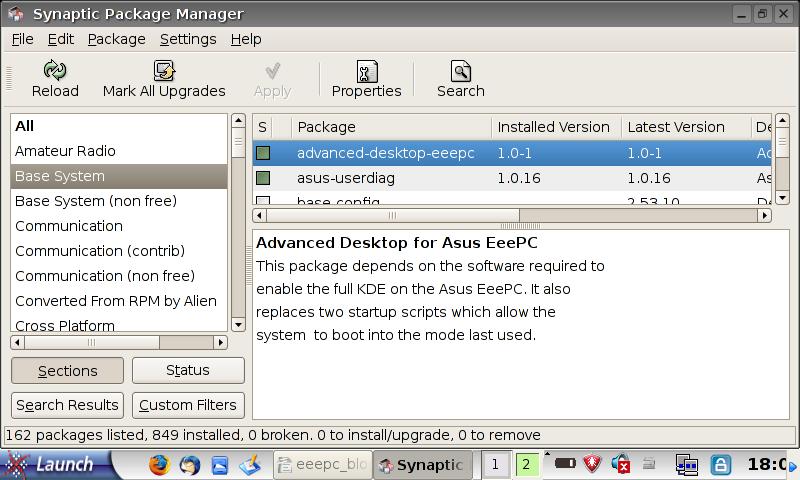 To install, I highlighted advanced-desktop-eeepc and pressed CTRL-I (you can aslo click the checkbox to mark for installation) then I use dCTRL-P (or the Apply button) to install. I found an annoying bug here and needed to maximise the window twice until I could see the button to install the software.

When the machine restarted it booted up the Advanced Desktop.