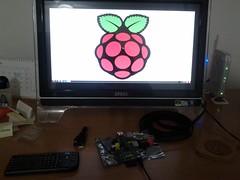 It’s been a while since I raved about losing a weekend getting to grips with Linux on a home project to build a music server.

It took a weekend to get the open source Squeezebox music server software to run on Ubuntu – that was two years ago.

Now thanks to the Raspberry Pi, it is entirely possible to get going in under an hour – if you can Google instructions and are comfortable copying and pasting bits of code.

All you need is a £30 Raspberry Pi (the Model B with 512 MB of memory), a micro USB power supplier (standard Android phone charger should work), a 4 GB or bigger SD card (I used a £12  8 GB class 10 card from Maplins), and a network cable to plug the Pi into your router.

There’s plenty of places to find out how to get started. I’ll link to the stuff I found useful.You’ll need to decide which Rasberry Pi Linux distribution to use, download it from a standard PC then copy the “image” file onto the SD card.

You will need a special program to copy an image of the Raspberry Pi Linux distribution to the SD card, as standard Windows file copy will not work. Again a Google search will show a number of applications that will work: I used Win32 Disk Imager.

Unplug the SD card and plug it into your Pi, connect the network cable to your router and boot up!

This gets you going, the Pi will light up and you’re up and running but you won’t be able to see anything as no monitor or keyboard is connected.

My preferred way to work with a Linux system is by remote access using the excellent Putty tool to connect using SSH.

To use Putty you will need to find the IP address of your Pi. This is found though your router management console. On my D-Link router I log into http://192.168.1.1 and click on the Network tab, which lists all the devices connected to my home network. It detected the Raspberry Pi – mine had a machine name of RaspPi, and I was able to reserve the IP address.This way, I can use Putty with the same IP address to log into the Pi.

Once Putty is running, you will need to log in using the user name (pi) and password (raspberry).

The Linux distribution I chose was SqueezePlug. This allows you to set up a SqueezeBox music server and/or a player to access your existing server. The player can be controlled wirelessly from an Android or iOS device (such as the free Logitech Squeezebox controller in the Google Play store).

That’s it – and it can be installed and running in under an hour.

Going forward, try the Raspbmc Linux distribution, which allows you to run a media centre on the Raspberry Pi. I have been able to use the Pi to stream Freeview, BBC iPlayer and ITV Player to my Nexus 7 Android tablet using the TVHGuide client app. it is also possible to access these streams from any device running an XBMC client.

This time, you need to plug the Pi into a display, you’ll also need a powered USB hub, a compatible USB digital TV receiver and a Wi-Fi adapter. There’s quite a few steps:

3. Configure tvheadend and enable external devices to connect to it