Obviously, the Computer Weekly Developer Network is not interested in advertising, public relations spin or any of the elements that go to make up the so-called ‘marketing mix’ in any shape or form.

But the SAP ‘Run Simple’ campaign does throw up a discussion point.

The ‘Run Simple’ is nothing more than a cheesy strapline designed to be emblazoned upon airport advertising hoardings and other corporate collateral paraphernalia, clearly.

Except it isn’t. It does actually have a meaning and purpose.

The runtime simplicity element that SAP is eluding to comes back to the word that we are repeatedly using in the context of contemporary software application development — automation.

The automation element here comes back to the core elements of the total codebase that can be automated where defined models from one use case or another can be applied as best practice templates to another dataset, another database computation or indeed another software application task at a wider level.

This in many senses is why SAP has packaged it’s latest SAP Leonardo offering as it has.

SAP co-founder and all round lovable eccentric geekmeister Dr Hasso Plattner has called SAP Leonardo a ‘bounding box‘ — he borrows the geometric term to describe the way SAP Leonardo surrounds and encapsulates a family of SAP products and tools to present data engineers and developers with a more automated set of functions.

The idea, believe it or not, is that makes things run more simple.

In tangible terms, we are talking about elements such as the recently announced industry accelerators.

“Industry accelerator packages for SAP Leonardo will focus on use cases for specific industries that are a powerful differentiator for SAP. Customers will not have to assemble pieces and parts to solve a business problem. We will use included services that tailor pre-defined software elements for the specific customer implementation. Everything will come at a pre-defined price and our engagement is time-bound, so every customer has an accelerated time-to-value,” said SAP’s Leonardo lead Mala Anand.

In brief then, this is the deeply technical justification behind why SAP uses this ad slogan.

Not everybody is sold on this line of course and industry commentators have called out SAP’s simplicity play as something of a myth saying that it is not possible to provide massive configuration for multiple markets in the way that the firm claims is possible. We provide this note just for fairness and balance.

NOTE: To other firms. No, we don’t want to deconstruct your advertising slogan on this column unless you have a specific developer runtime relevance to clarify. 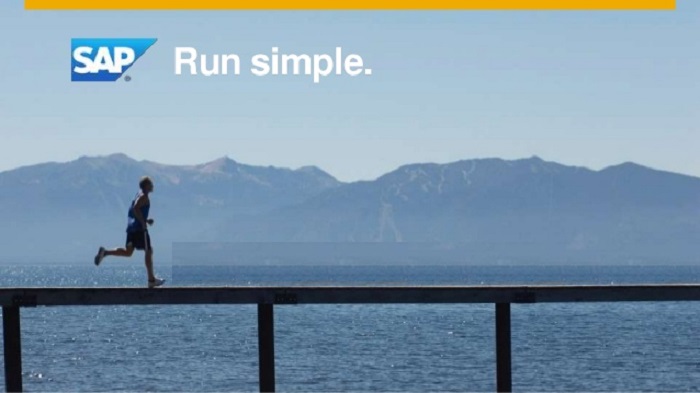