Build once, deploy everywhere. We’ve heard it all before haven’t we?

Discussion now surfaces on a ‘new’ type of application. One that is being the progressive web app (or PWA, if you must).

So what is a PWA?

The core idea, essentially, is that a progressive web app will function well on every device form factor, for every user, for every browser.

“By taking the best functionality of native apps (those designed for a specific operating system that leverage device functionality to increase speed and performance) and enabling access via a browser and a URL, PWAs can solve real business challenges,” said Will Morris, managing partner of specialist web design company Alchemy Digital.

MobiLens reported in September 2016 that each month, 51% of UK adults install zero apps on average. There are currently more than two million apps on the App Store and Google Play, rendering it extremely difficult to be ‘discovered’ by users.

Further here then, a PWA should be able to work offline and PWAs are also what we might call ‘re-engagable’ i.e. the user can go away and come back to the app without having to re-load it.

“The increased speed to market, competitive edge and low cost of PWAs in comparison to regular apps come hand in hand with their low CapEx and OpEx. Businesses can get their apps to market much faster because they are not awaiting approval from store platforms and can be made available instantly. This also goes for continuous delivery of maintenance updates: no application store approval periods, and no need for the user to wait to get their hands on the app, since PWAs are installed on the device by simply adding it to the home page,” said Morris.

Google’s developer pages discuss progressive web apps more here, it appears that the search giant itself first proposed the idea back in 2015.

Kevin Ferrugia explains more on Smashing Magazine here and says that progressive web apps take advantage of the much larger web ecosystem, plugins and community and the relative ease of deploying and maintaining a website when compared to a native application in the respective app stores.

“For those of you who develop on both mobile and web, you’ll appreciate that a website can be built in less time, that an API does not need to be maintained with backwards-compatibility (all users will run the same version of your website’s code, unlike the version fragmentation of native apps) and that the app will generally be easier to deploy and maintain,” writes Ferrugia.

Spin or substance? No this is real… and there is quite a maker movement driving the notion of the PWA and we might well include Gmail offline as a prime example. 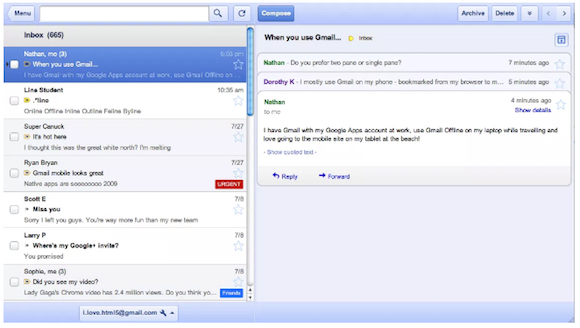