Obviously the Internet of cardiovascular diagnostics Things (IocdT) is really just the IoT with a specific bent towards healthcare implementations — but the question is, at what point do we start looking at wellbeing-focus software application development streams above and beyond the health benefits of, say, wearables like the Fitbit? 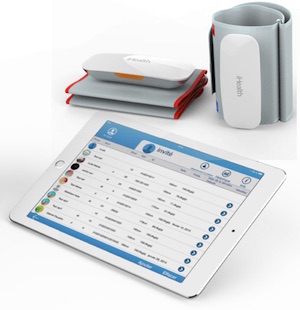 NOTE: No disrespect to Fitbit, even if my ex-beloved Fitbit One did indeed die a death after 18 months of constant use.

To reemphasise our initial point, if products like iHealth CardioLab exist (the first connected diagnostics system for the early detection of cardiovascular disease), then at what point can we start making these products (and their corresponding and supporting software applications) more accessible?

iHealth presents a wireless monitoring system that allows general practitioners to obtain a detailed cardiovascular assessment of patients in less than two minutes.

The tipping point here is… at what point can the healthcare focused IoT technologies that we use start (as this product sets out to do) anticipating many health problems so we can switch from curative health to preventive health?

“Because of the current differing medical procedures for measuring the ABI (should the doctor use the posterior tibial artery, anterior tibial artery or dorsalis pedis artery?), we decided to unify the results by introducing an oscillometric measuring system to standardize ABI and make it accessible to all physicians,” says Uwe Diegel, CEO of iHealthLabs Europe.

“Easy to use, allowing for quick measurement – less than two minutes – with very low margins of error associated with handling errors, the iHealth CardioLab is aimed to be used as a prevention tool by general practitioners to detect problems before they translate into external events”.

The connection between the iHealth Pro App and the iHealth CardioLab is made by Bluetooth, allowing healthcare professionals to easily import the results of the patient and incorporate them in his medical records.