Don’t you just hate it when you go through an airport and read those big billboard ads that say: “Over 90% Of The World’s Fortune 500 Companies Run xyz Software.”

It’s usually SAP, Oracle, Microsoft, IBM, HP — or some combination of these usual suspects plus others.

Don’t get me wrong, I enjoy talking to all these companies on a daily basis, it’s just that I think that tagline is misleading. Yes — 90% of the Fortune 500 probably does run SAP, but they run ALL the other vendors’ packages too.

Anyway, rant over, is there more?

Yes! Akamai states that it is now processing (and I quote): “Between 15 and 30% of the world’s Internet traffic,” on a daily basis.

Oh give me strength, not another one.

Yes, but despite the company’s heavily fermented cheese flavoured tagline: (*read it to yourself in an American accent for maximum effect*) “We help to mitigate the challenges of operating in a hyper-connected world,” the global reach that this vendor lays claim to do appear to be substantiated.

Akamai says that its “highly distributed” platform of tens of thousands servers has evolved to help transform cloud computing into the quantifiable and manageable medium that it is today.

Hmm, big claims — OK so what’s the message for developers then?

Tablet devices are massively popular. Tablet devices depend on web-delivered cloud-powered hosted apps to operate given their massively connected status and comparatively meagre internal resources. Developers need to know that web-based cloud backbones can support their apps and they also need to know where in the world broadband penetration is high and where uptime and connections are good.

The answer (well, part of the answer) may be to view Akamai’s Internet visualisation dashboards available here — kind of like a global speedometer for the web really.

According to Akamai, “Initially developed to deliver multimedia content (images videos, HD content), the Akamai platform now consists of more than 84,000 servers, strategically situated around the globe, residing within more than 1000 of the world’s networks.”

Selected screen shots from the Akamai are shown below: 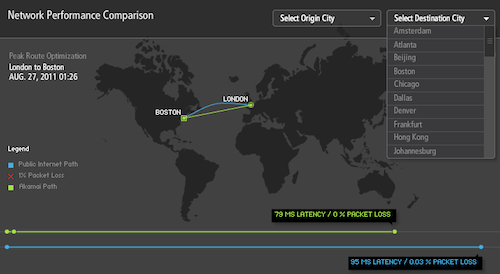 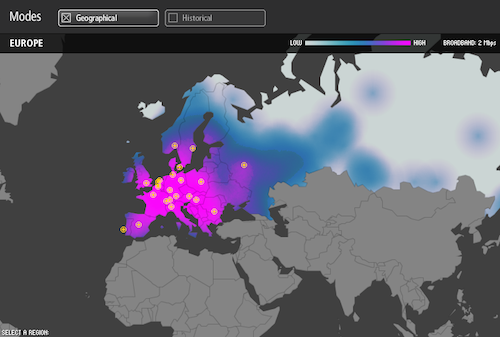