The technology recruitment market is a lacklustre place, at least that’s what people say. Run down by years of pushy headhunters, the movement to online advertising and individual’s proclivity for using social and personal channels to seek out new positions… the tech job market needs reinvention.

This is perhaps some of the thinking behind tech startup talent.io, the firm has created a new software ‘platform’ (quite how platform-level expansive it is remains to be seen) that operates as a ‘selective recruitment’ tools to bring together firms with  developers.

How does selective recruitment work?

Each week, it handpicks the best candidates (around 10%) from a pool of weekly sign ups – based on their skills and availability – and companies use the platform to interact with them during a two-week session.

They connect with the developers that best suit their needs and send job descriptions including salary range as well as request interviews. If candidates are interested, both sides meet and the process goes on, with talent.io staff on hand to provide salary negotiation advice and more.

John Hazelton, country manager UK at talent.io insists that his firm is human-centric.

“We are not a sales team focused on getting our numbers up and we don’t use algorithms to select candidates. Traditional recruitment agencies are very focused on client care and focus very little on the candidates. This model is failing the IT industry,” said Hazelton.

Developer roles/skills most sought after

Most companies are looking for Full Stack Developers across multiple tech stacks.

According to a statement made by talent.io for the Computer Weekly Developer Network, “With the Data Science and DevOps positions, we feel there is a shortage because of they are still quite young roles, they haven’t been defined yet and people are still learning what these roles are and how they should be utilised. Ruby is a very fast language to learn, so a lot of startups take it as their main techno stack. When startups grow, they need more developers, however Ruby is a relatively new language (15 years), not a lot of people know how to develop with it.”

The firm says that programmers and all strains of software engineers should really showcase their experience and skills. Highlight their passion for code, by adding links to their personal projects (Github, StackOverflow), detail their profile as much as possible in accentuating stacks and projects they worked on.

Jonathan Azoulay, founder of talent.io said: “Despite the uncertain economy that lies ahead, London remains the number one tech ecosystem in Europe, and it’s been given a boost after Apple, Google and Facebook recently announced plans to hire more staff in the UK.”

In closing… talent.io arrives in the UK following a successful launch in France last year and six months after launching in Germany. 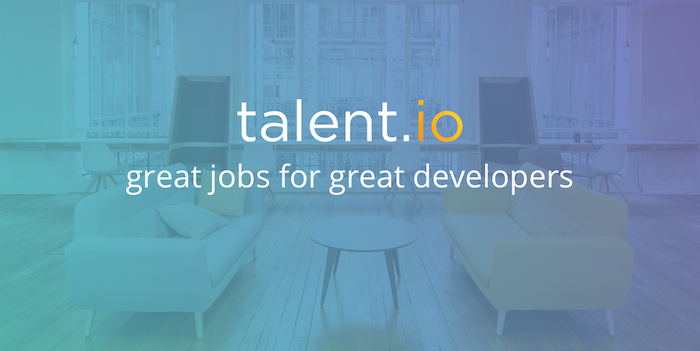